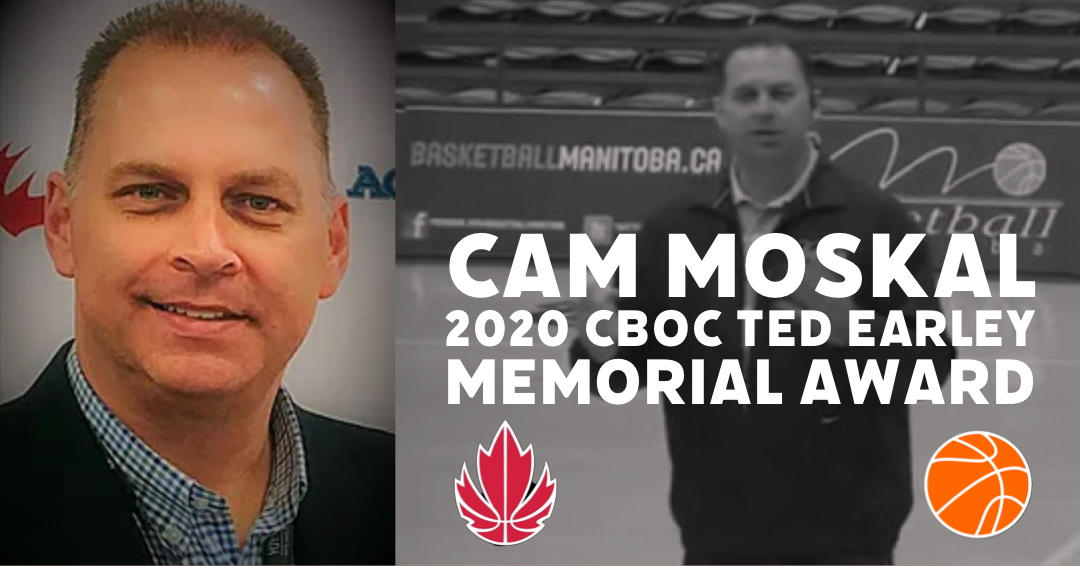 The Canadian Basketball Officials Commission (CBOC) has announced that Cam Moskal of Winnipeg has been presented its 2020 recipient of the Ted Earley Memorial Award.  This is CBOC’s highest award and the award criteria are:
Presented to: Cam Moskal (Manitoba)
Cam officiated basketball for over 34 years, starting in 1985 at the age of 16. While playing
high school basketball he returned to his Junior High School to officiate games. When his high
school playing days ended, he decided that officiating was his best avenue for continued
success in basketball.
Cam has worked all levels of basketball in Manitoba from Jr. High, High School and Senior Leagues. He also worked CIAU/CIS/U-Sport for 26 years and 8 years in the semi-professional leagues of the NBL and IBA.
Cam worked at 6 CIAU/CIS Men’s National Championships (earning 2 championship finals and 2 consolation finals), 2 Women’s Nationals, 2 CCAA Nationals, 5 Canada Basketball National
championships, and 9 High School AAAA Provincial Championships. At the International level Cam obtained his FIBA License in 2004 and was assigned to the 2006 Commonwealth Games in Melbourne, Australia. He was awarded the Women’s Semi-final and the Gold Medal game on the Men’s side.
In addition to Cam’s stellar on-court career he has served in multiple administrative capacities
at both the provincial and national levels. Provincially he served on the board of the Manitoba Association of Basketball Officials as President for 8 years (1996-2004), as Provincial Interpreter for 9 years (2004- 2013) and Provincial Supervisor for 2 years (2015-2017). Prior to that Cam served on the Executive of the Metropolitan Basketball Officials Association out of Winnipeg for 8 years including 4 years as President. Cam has also worked as a provincial evaluator and mentor for MABO for several years. He has helped deliver numerous provincial officiating clinics and camps throughout Manitoba.
Cam was invited to the National Evaluators panel in 2014. He has worked as a Referee Coach at 5 national championships to date and continues to serve in this capacity. Cam was on CABO’s National Executive from 2016 to 2020 as the National Interpreter.
CONGRATULATIONS CAM!
Source: https://gameplanbasketball.ca/pdfs/WB2020CBOCAwardsEN.pdf