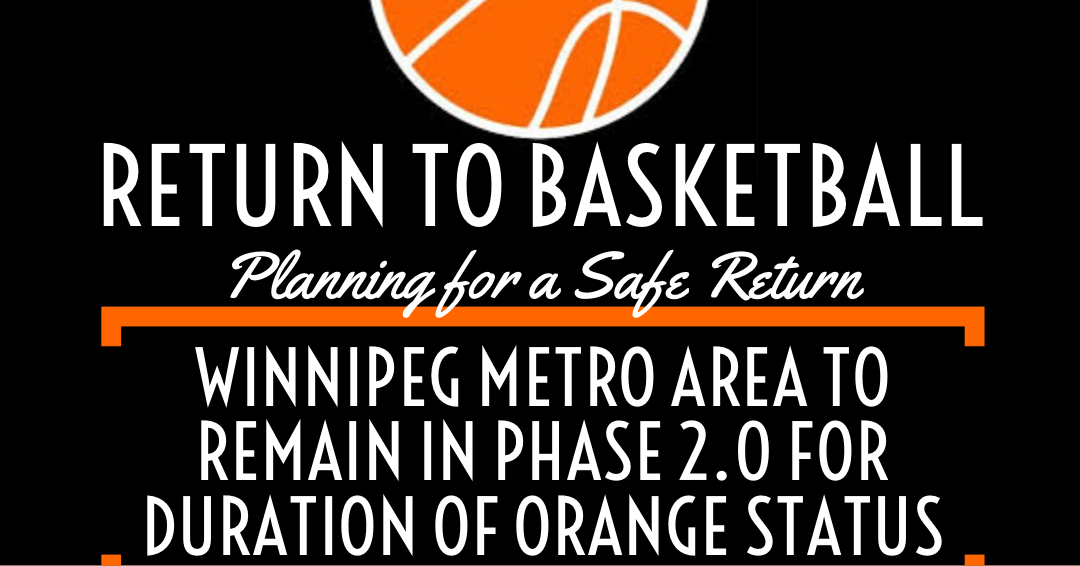 The Basketball Manitoba Board of Directors has made the decision to continue under the Phase 2.0 Return to Basketball status for the Winnipeg Metro Region for the duration of the Orange Health Status that was announced by the Manitoba Provincial Government on September 25, 2020.  A move to Phase 2.5 or Phase 3 will remain on hold in the Winnipeg area until the Orange level status changes.

The key difference of Phase 2 to Phase 2.5 allows for shared equipment in training environments that would involve drills and skills tied to passing and rebounding among others.  Phase 3 will see the introduction to 3x3 play within a training group or team.

All other Manitoba Health Regions will continue to be in Phase 2.5 until further notice.

More details can be found below.

The statement made by the Manitoba Provincial Government with respect to a new maximum of 10 people gathering in an indoor or outdoor space does NOT apply to athletic or fitness activities. This has been confirmed by Sport Manitoba who has stated to Basketball Manitoba…

"The Province has provided us with the direction that at this time, the maximum occupancy of 10 people indoors and outdoors and the wearing of masks does not apply to those actively engaging in athletic or fitness activities."

The current restriction in both Phases 2.0 and 2.5 of 15 total people in a gymnasium space remains in effect (includes both players and coaches present in the space).

The new mask mandate set by the Province will also affect all athletes and coaches in all health regions at their next training sessions. Everyone involved in the basketball training sessions must wear a mask as defined by the Province when inside in any public space including coming and going from any basketball venue. Athletes however can remove their masks during their training session but are to return them once completed. Coaches are asked to wear their masks for the duration of their sessions but can remove the mask temporarily if they need to address the entire gym to allow their voice to be heard.

Basketball programs are advised to consult with the facility that they are using for their basketball training as they may have additional information that may put other limits on a training group in connection to these changes.

The affected Winnipeg Metropolitan regions included in this return to Phase 2.0 change are...