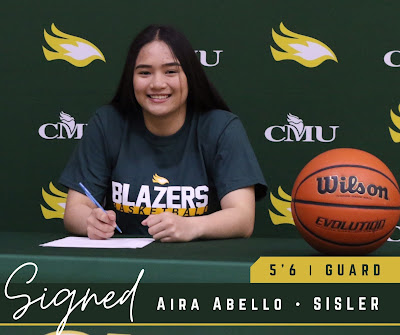 Sisler High School's Aira Abello has officially committed to the CMU Women's Basketball program for 2020-21, becoming the highest-ranking Manitoba High School girls player to ever sign with the Blazers. The offensively-gifted Spartans guard was listed as the #3 ranked player in the province in the annual Winnipeg Sun's list of the top ten high school players in 2020.

"We are thrilled to have Aira join us," said veteran CMU head coach Joe Di Curzio. "She is an impact player that has the ability to break down defenses because she possesses the innate ability to take on any player one-on-one off the dribble. She also possesses an incredible basketball IQ, has great leadership qualities and shows terrific range from the 3-point line."

Abello became the third player in the history of Sisler to play three seasons of varsity basketball for the Spartans. The 2020 Basketball Manitoba Graduating All-Star leaves her high school as one of the top scorers in the program's history and became only the fifth player to surpass 1,000 career points as a Spartan. Abello led her team in the majority of statistical categories throughout her Sisler career and was the only graduating player to be named to the Winnipeg Top Ten Coaches Poll in each of her three seasons of varsity basketball.

"The Sisler program will miss the impact that Aira has had on the players and the community and I could not be more proud of how much she has grown during her time at Sisler," said Abello's high school head coach, Michael Tan. "I look forward to following the next chapter of her basketball career."

Added to her numerous awards, Abello was named an All-Manitoban in 2019 and 2020 and has represented her home province with the Manitoba Provincial Team program since 2016.

Arsenio dela Cruz of the Manitoba Magic, who has served as Abello's club coach for much of her youth development, said the now 5'6 guard showed evidence of being a uniquely talented basketball player, even as an 8-year old. "Her skills and basketball IQ were far ahead of a lot of others in the league," said dela Cruz. "I believe that her four years of playing in the coed division in the WAAY community league helped develop her tenacity and drive to compete. Her up-tempo style coupled with her court-vision and awareness makes her a definite threat for any opposition."

The Blazers 2020-21 NIAC season has been pushed back to a January start date due to the current pandemic while the regular season portion of MCAC basketball is scheduled to tip-off in late November. 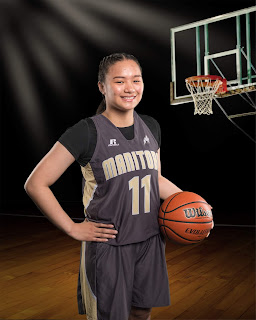