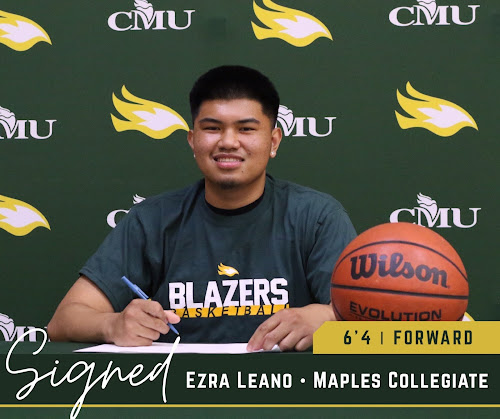 CMU added another key recruit to their 2020 Men's Basketball first-year class, signing 6'4 Maples Collegiate forward Ezra Leano for the 2020-21 NIAC season. Blazers' head coach Scott Martin described Leano as, "an inside and outside offensive threat who comes from a strong, well-coached high school program."
After guiding the Marauders to the AAAA Provincial Championships as a Grade 11 player in 2019, Leano helped his north-Winnipeg high school to a fourth-place finish in the ultra-competitive KPAC division in 2020 before the pandemic outbreak cut short the seasons for all Manitoba high school sports including basketball.
Averaging 25 points and 15 rebounds per game, Leano earned recognition as a 2020 KPAC All-star and stood among the best in 'AAAA' as a 2020 Basketball Manitoba Graduating All-star. Maple Collegiate would also honour the soon-to-be Blazers' rookie by naming Leano their 2020 Male Athlete of the Year.
"Ezra has great hands for a big man," added Martin when describing Leano's skill set. "He plays strong inside but possesses good, soft hands to catch, shoot and knockdown baskets from the outside as well. Ezra will be a nice player for us."
Leano also made his mark in the club circuit with two Winnipeg-based teams during his youth career, Spirit and Gladiators, and featured on the elite FBA (Filipino Basketball Association) team that represented Winnipeg in Chicago in 2016 and 2019.
The Northern Intercollegiate Athletic Conference (NIAC) recently followed the lead of multiple basketball conferences in Canada and the USA, postponing the start of the 2020-21 season to January 2021. In response to the pandemic, NIAC has moved its 2020 Championship dates from February 18-20 to March 19-21 to allow four additional weeks of regular season play.
Source: https://athletics.cmu.ca/2020/07/27/big-boost-for-blazers-signing-maples-power-forward-leano/