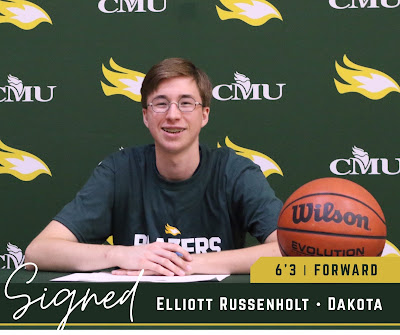 With a full year of collegiate basketball now on his resume, CMU head coach Scott Martin is continuing to piece together his roster for 2020-21, adding the commitment of Dakota Collegiate forward Elliott Russenholt this week. At 6'3, Russenholt is expected to be the kind of forward that can stretch defenses as a solid outside scoring threat.

"Elliott is a bit of a late bloomer who is still growing and developing," said the second-year bench boss who took over the CMU program after a long, successful career at Winnipeg's Sisler High School. "He gives us a deep 3-point threat and is going to be a solid contributor for us in the future. He has good instincts and is a true student of the game."

Russenholt helped his south-Winnipeg high school to a second-place finish in the very competitive SCAC conference in 2020 and was preparing for the 'AAAA' Provincials as the #5 seed before the pandemic forced the cancellation of a championship tournament. The Lancers' forward contributed offensively at a rate of just under 6 points per game while adding a productive 3 rebounds.

"Dakota is proud of Elliott for achieving his goal of playing at the next level," said Russenholt's high school coach, Dean Favoni. "Elliott is a team-first player who always puts the goals of the team ahead of his own and did whatever was asked of him with no complaints. His ability to hit the 3-point shot and follow gameplan instructions made him a valuable player for the Lancers. Elliott is also a good student who takes the moniker "student-athlete" very seriously."

Russenholt has honed his craft with the Triumph club basketball program since 2016 and was part of a Peg City league championship in 2019. At the club level, he averaged over 9 points per game and shot the ball well, at 35% from 3-point range.

The decision to attend CMU was an easy one for Russenholt who has a special connection to the university and the campus, in particular. CMU residence building, Poettcker Hall, bears the name of Russenholt's great grandfather, Henry Poettcker, who served as the third president of CMBC (now CMU) and the second president since the campus moved to its current location on the corner of Grant and Shaftesbury.