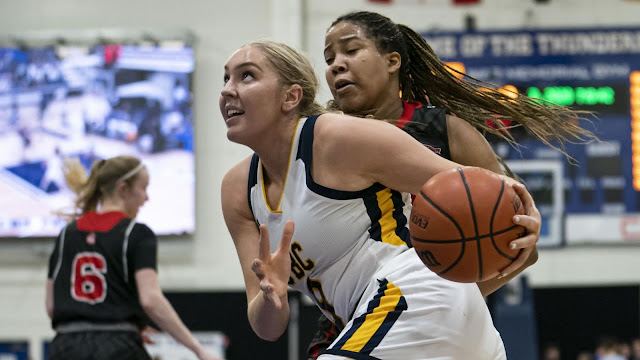 UBC's Keylyn Filewich of Manitoba has been named a 1st Team All-Canadian by USPORTS as part of the national awards evening recognizing outstanding players and coaches form the 2019-20 season.  This new honour comes a week after being named the Canada West Player of the Year after leading the conference in field goal percentage at 59.1, while finishing fourth in points per game at 19.1. Defensively, Filewich led the conference in blocks with 28 and was fourth in defensive rebounds with 133.

The fourth-year forward has been rewarded for her consistency at both ends of the floor with the conference's Player of the Year honour.

Filewich led the conference in blocks (28) and field goal percentage (59.1) this season, while finishing inside the top five in several other key statistical categories, including points per game (19.1 - 4th), offensive rebounds (74 - 3rd), and defensive rebounds (133 - 4th).

Her all-around game was pivotal to UBC's success, as the Thunderbirds went 16-4.

“Keylyn's had a very consistent career and every year she’s added new dimensions to her game. She’s a leader for us on and off the floor and we rely on her veteran presence and consistency. This year she’s brought even more consistency and leadership to the group. To be on the leaderboard for points, rebounds, and shooting percentage just speaks to her consistency and level of play. The exciting part about Keylyn is I know there’s another level we can get to and I’m looking forward to that for her fifth and final year.” – UBC Head Coach Deb Huband.