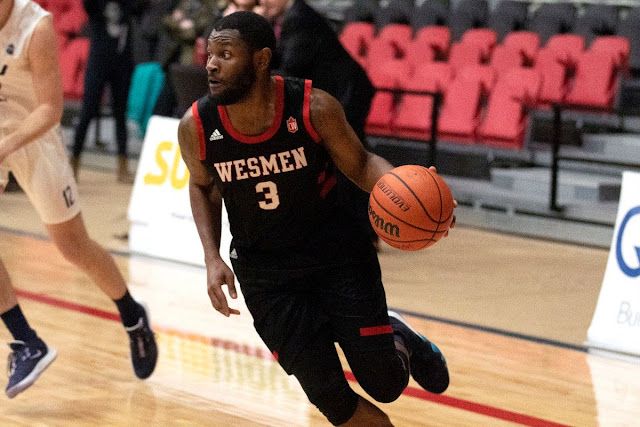 Another year, another all-star for Narcisse Ambanza.

Ambanza, the fourth-year guard with the Winnipeg Wesmen men’s basketball team, was named a Canada West second-team all-star as the conference announced its annual top performers on Thursday.

It is the fourth time in four seasons Ambanza has been named a conference all-star becoming the first Wesmen player to make four straight all-star teams since Erfan Nasajpour did it from 2004 to 2008.
Ambanza was once again the catalyst for a Wesmen men’s team that finished the conference season 10-10 and made the post-season for the eighth straight year.

The Toronto native averaged a team-high 18.1 points per game and finished eighth in the conference in scoring. His scoring mark was just 0.8 points per game off his career-high, set last season.
Ambanza scored at least 20 points in 10 conference games, including a season-high 28 at UBC on Feb. 7.

Ambanza started all 20 conference games this season and averaged 33.9 minutes per game, which was fifth-highest in the conference.

It is the second straight season Ambanza has been named second-team all-conference. In 2017-18 he was named all-conference third-team and, as a freshman in 2016-17, was named to the conference’s all-rookie team.