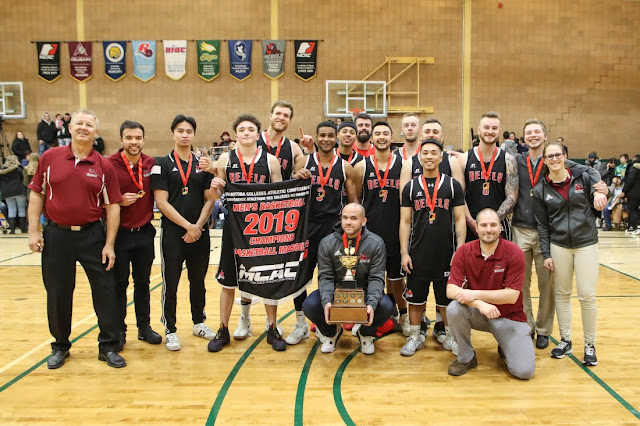 The Rebels continued their MCAC dominance this season and secured the #1 seed with a 13-0 regular season record. RRC has won two consecutive MCAC championships and have won nine of the last 10 league titles.
RRC still has a veteran core with senior forward Mark Ridd and third-year guard Torrez McKoy leading the way. Ridd was a monster on the glass in last year’s championship game, grabbing 29 rebounds — he was named finals MVP. The Rebels edged out the PUC Pilots 76-68 in that game.

This year, McKoy is leading the Rebels with 20.2 points per game, ranking third in the league. The Rebels dominant season is fueled by an impressive field goal percentage — RRC has four of the top five shooters in the MCAC. Francesco Tocci is leading the league by hitting 61 per cent of his shots this season.
Tocci has had a dominant season on the defensive end of the court as well, averaging 10.1 rebounds per game and blocking 21 total shots.
RRC has a bye straight to the final on Saturday and will play the winner of Thursday’s semi-final between the CMU Blazers and PUC Pilots.

After falling short in the championship game last season, the PUC Pilots are looking for redemption this year.
The Pilots’ are led by Jordan Lawson, the team’s captain. Lawson is leading the league with 33.4 points per game — highlighted by his 52-point night against the Rebels this season, an MCAC record.

A key addition for the Pilots this season has been first-year guard Bryant Smith. He’s second in the MCAC with 3.83 assists per game and has 17 total steals. Daniel Kilmartin has also been a force on the glass, averaging a league best 10.3 rebounds per game for PUC.
The Pilots are coming off a 106-89 win over LLTC and are hoping to carry their winning ways into their semi-final match against the CMU Blazers on Thursday.
“After splitting the decision against them [CMU] in the season, we are confident in our ability to play them and ready to fight our way to the final and face Red River,” said Pilots’ head coach Pierre Dubreuil.
The Pilots want to upset the Rebels, a team Lawson said he “hates losing to.”

After an early exit from last year’s MCAC playoffs, the CMU Blazers are looking to do what they did in 2017 — become league champions.
Isaiah Cole is leading the CMU attack this season, averaging 23.1 points per game — ranking second in the league behind PUC’s Lawson.

The Blazers will face the Pilots in the MCAC semi-final match, a team they recently split a weekend series with. One player that had success in both matches was Kalvin Mendez, he was named MCAC athlete of the week following the weekend series.
Mendez scored 29 points, and grabbed five rebounds in CMU’s win, and managed to net 21 points in the loss. The Blazers will need a similar outing from Mendez to help lead them past the Lawson led PUC attack.
Pacifique Jubilate has been a key contributor on the glass this season for the Blazers, averaging 10 rebounds per game — third best in the MCAC.
The Blazers will look to take care of business on Thursday and play the Rebels on Saturday for their first title since 2017.