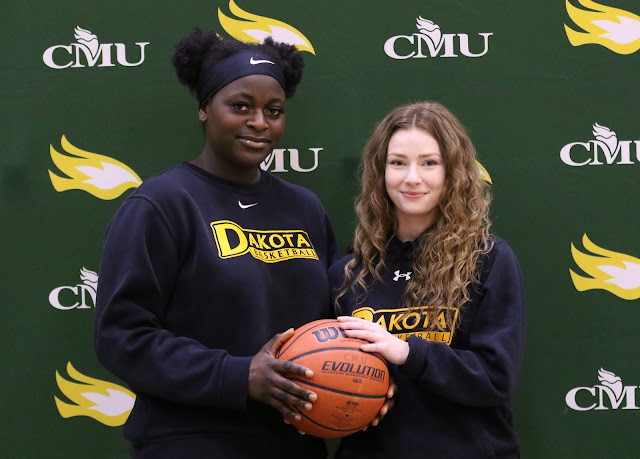 CMU Athletics has announced the signing of two members of the Dakota Lancers, Nifemi Gbadamosi and Madison Zadro. The pair have helped their south Winnipeg high school to their current position at #6 in 'AAAA' Manitoba Girls Basketball rankings, thanks to strong performances that included a second-place finish at the Sisler tournament and a third-place result at the Pembina Trails tournament.

A gifted rebounder who was nominated for Dakota's Female Athlete of the Year in 2019, Gbadamosi is a strong post player with a soft offensive touch around the basket. Midway through her Grade 12 season, she boasts a rebounding average of 12 per game while helping out on the scoreboard with 7 points. Standing 5'11, Gbadamosi is coming off a career-high 23 point, 17 rebound performance that has Dakota head coach Eric Sung, believing in her continued growth on the basketball court.

"Nifemi is one of the hardest working athletes I know and her basketball journey is fascinating," said Sung. "She sets her mind to something and she will work hard to achieve it. She is a strong post player with powerful moves around the hoop and is a natural rebounder."

While Gbadamosi has been a force for the Lancers under the hoop, new CMU teammate Madison Zadro has been getting it done from the perimeter after spending her high school basketball career at Transcona Collegiate before a move to Dakota for Grade 12. Zadro was TCI basketball for two years, serving as team captain of the varsity team for Grade 10 and 11, earning her team's Most Valuable Player selection and adding to that her high school's Female Athlete of the Year both seasons.

The new Lancer is averaging 12 points, 6 rebounds and 5 steals per game in the 2019-20 season and boasts a 24-point outing with Dakota that led her to a Player of the Game selection at the Pembina Trails Tournament. Zadro's career-high came at TCI where in Grade 11 the guard cashed in 36.

"Madison is a dynamic two-way guard with amazing ball-handling abilities and feel for the game," said Sung of Zadro. "She plays with a high motor and fearless mentality, I am so excited for Madison and happy that she chose CMU to continue pursuing basketball."

"We are very happy to get the commitment of Madison and Nifemi," said CMU head coach Joe Di Curzio. "They are both great athletes and people, coming from an elite high school program. We are expecting them to be strong performers for us next year and in the future."

This weekend Gbadamosi, Zadro and their Dakota teammates are competing in the Sturgeon Heights Tournament, hoping to move themselves up the MHSAA rankings as the teams draw closer to Manitoba's March Madness next month.

CMU women's basketball is coming off a thrilling conclusion to their 2019-20 NIAC regular season where the Blazers scored back to back wins to earn the top spot in both the MCAC and NIAC rankings as they enter twin Championship weekends. CMU will face the winner of Thursday's MCAC semifinal on Saturday afternoon at Red River College with hopes of hanging onto the banner they won on home court last season. From there, CMU travels to Minnesota to challenge their NIAC rivals. The Blazers will face the winner of Free Lutheran versus Trinity Lions on Saturday in Cass Lake, Minnesota.