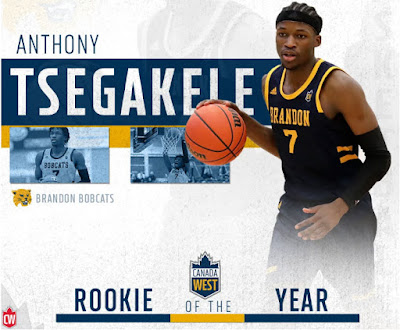 Anthony Tsegakele takes home the Canada West Rookie of the Year award after emerging as a leader for the Brandon Bobcats.

Tsegakele had an excellent season for the Bobcats, logging more than 33 minutes per game, while averaging a double-double for Brandon. His 17.4 points per game was good for 10th in the conference, while his 11.9 rebounds per game was second only to Player of the Year Brett Layton.

He is the second Bobcat to be named the top first-year player in CW, joining Ilarion Bonhomme who won the honour during the 2011-12 season.
Coach's comments:

“We are excited for Anthony on receiving such a prestigious award after his first season as a Bobcat. We as a team know how hard he works, but to have him recognized by all the other coaches across Canada West is something he should be very proud of. He not only led us in many statistical categories, but he helped us return to the playoffs as a freshman, which is no small feat in such a competitive conference.” – Brandon Head Coach Gil Cheung.