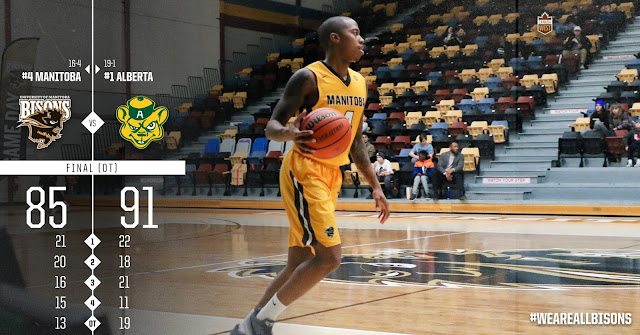 EDMONTON – In a classic battle between two teams competing for a spot at nationals and a trip to the Canada West Final, the No. 3 ranked Alberta Golden Bears narrowly beat the No. 10 Manitoba Bisons 91-85 in overtime.
Adam Paige scored eight of his 13 points in overtime for the Bears and 19 of Alberta's points in extra time overall — providing the difference in a game at Saville Community Sports Centre that featured an incredible 18 lead changes.
The top seed Alberta will now host the three-seed UBC Thunderbirds in the Canada West Final next weekend, while also securing their ticket to the 2020 U SPORTS Final 8 in Ottawa.
"That whole game was so tight. Every time we hit a shot, they answered. I think it was the energy with our team late that gave us that push," said Paige. "We needed somebody to step up in the OT, and thankfully I hit a couple shots."
Fifth-year Bears forward Brody Clarke scored 17 of his team-high 24 points in the second half, including 10 points in the fourth quarter. Cole Knudsen also 12 for Alberta, with Tyus Jefferson adding 11.
Rashawn Browne led the Bisons with a game-high 33 points on 10/19 shooting, with Keiran Zziwa adding 19.
"That was a great college basketball game. What a treat for everyone here. Two really good teams, battling with everything on the line. I think at the end, their depth proved to be too much," said Bisons head coach Kirby Schepp.
"Browne is the definition of an All-Canadian. I think he's the best point guard in the country, and he showed that tonight."
Alberta took a 22-21 lead after the first, with Geoffrey James leading Alberta's attack with six. The Bears finished the quarter hitting on five of their final six shots.
Browne took off in the second quarter for Manitoba, scoring 10 points and adding five assists. Manitoba outscored Alberta 20-18 in the second, taking a one-point lead into halftime.
The Bears struggled to score to open the third quarter, missing their first five shots from deep. However, thanks to a run from Brody Clarke that saw him score nine-straight points in the third, the Bears took a 61-57 lead into the fourth.
Clarke continued to shoot well in the fourth, hitting on 9 of 10 shots at one point in the second half.
Zziwa hit an 18-foot jumper with 18 seconds left to give Manitoba a 72-70 lead, before Clarke tied the game at 72s with a floater with six seconds left.
Paige hit back-to-back threes in overtime, before throwing down a massive dunk to give Alberta a nine-point overtime lead — one the Bisons weren't able to overcome.