EDMONTON – One of the key pieces in the Brandon Bobcats ascent to the top of Canadian university basketball was honoured on October 29, 2019, as John Carson (MBHOF Class of '01) entered the Canada West Hall of Fame. 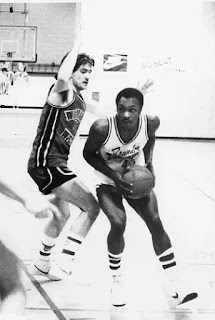 Carson, who starred for the Bobcats between 1982 and 1987, is the first Brandon University product to enter the conference's Hall of Fame, along with the first men's basketball inductee.

The Huntsville, N.C. product came to Brandon in the early 80s and dominated the competition. He was a five-time Great Plains Athletic Conference All-Star, five-time All-Canadian, and in 1985-86 was named the nation's top player.

In 1987 he led Brandon to the program's first men's basketball national title with a win over UBC, as Carson was named tournament MVP.

ABOUT THE CANADA WEST HALL OF FAME

For the last century, organized university sport has been a central part of the student experience at institutions across Western Canada. Beginning with the University of Manitoba capturing the first Western Canadian Intercollegiate Athletic Union (WCIAU) men's hockey banner in 1919-20, student-athletes have been competing to reach their full potential in sport and the classroom, while enriching campus life.

To commemorate 100 years of university sport across Western Canada, the Canada West Hall of Fame was created in the spring of 2019, with the first induction class set to be unveiled throughout the 2019-20 season.