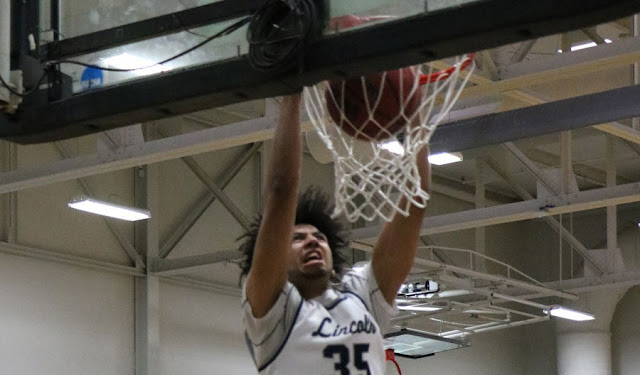 The season hasn’t even begun and Adam Benrabah already has his first assist.

Wesmen men’s basketball coach Mike Raimbault has announced another addition to his 2019-20 recruiting class in welcoming 6-foot-8 transfer forward Donte Makazu of North Delta, B.C., to the roster in time for next season.

Makazu sat out last season after leaving NCAA Division II Lincoln (Mo.) University following the 2017-18 season. He will be immediately available to play and have two years of eligibility remaining.
He will enroll in the Faculty of Kinesiology.

“I just really felt like I could trust Coach Raimbault a lot,” Makazu said. “I know a couple guys that played for him and I trust their word and they put in a good word for him being a good coach and an even better person.

Raimbault and the Wesmen have Benrabah to thank — to some extent — for Makazu’s decision. Benrabah, a fifth-year senior from Surrey, B.C., who played his first season with the Wesmen in 2018-19, met Makazu this off-season and helped sell the program to the power forward.
“(Benrabah) came out to B.C. and I met him for the first time and we’ve kinda been buddies since,” Makazu said. “He was just being honest. He wasn’t trying to force me to go there at all but he also wanted me to go there.”

Makazu also entertained offers from Saskatchewan and New Brunswick as well as other Division II offers before choosing Raimbault’s Wesmen.

Makazu transferred to Lincoln after averaging 9.7 points and 7.3 rebounds per game as a sophomore for Riverland (Mn.) Community College in 2016-17. At Lincoln, Makazu said he hoped to have a greater role in the team’s plans than what would be. He appeared in 14 games and averaged 8.5 minutes per contest while going 7-for-9 from the field for the season.
Makazu said the Wesmen are getting a multidimensional player who will provide depth in the frontcourt.

“I think obviously he’s going to bring some experience,” the coach said. “He’s definitely physical and will be able to play a couple different spots for us and should provide a big impact right away.

“He’s really strong, he’s physical and athletic enough to make plays above the rim. He can shoot it a bit, he can score on the inside, he’s a rebounder. Defensively he should bring some toughness to the game, so we’re expecting a lot.”