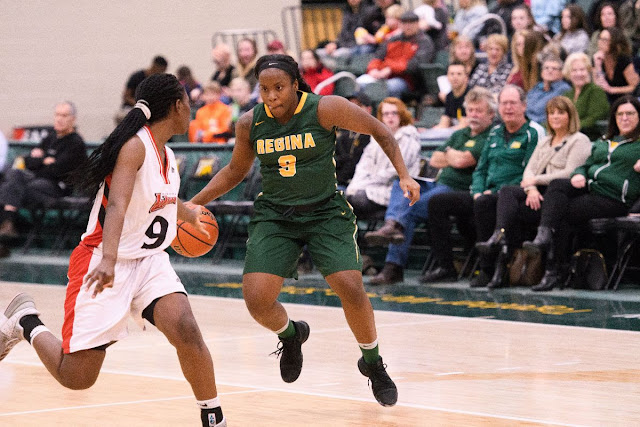 Tanya McKay is bringing one of the country's most talented basketball players back home to play for Winnipeg.

McKay, the head coach of the UWinnipeg Wesmen women's team, has officially gained the commitment of all-Canadian guard, and Winnipeg native, Kyanna Giles, who will suit up for the Wesmen in 2020-21 after transferring from the University of Regina.

Giles, after satisfying the U Sports rule requiring transferring student-athletes to sit out a year of competition, will have two years of eligibility remaining. At UWinnipeg she will pursue her Bachelor of Arts and Bachelor of Education degrees.

While Giles won't be eligible until 2020, she is the third recruit to be announced this off-season, joining Sturgeon Heights' Anna Kernaghan and Srishti Suren of Chennai, India.

Giles said her education was a top priority and UWinnipeg provided the right balance for transferring her academic credits over. But she's also taken notice of the roster that McKay has assembled and is excited for the chance to jump in and contribute.

"There's good players, it's a young team that works really hard," she said. "When we played against (Winnipeg) I could see they were hungry and ready to go and I feel like me coming in – I've been to three nationals, I've been to three Canada West finals, I've won a Canada West final – I know what we need to do, I know what it takes to get there, so I'm happy to help out."

At Regina, Giles averaged 16.1 points, 8.1 rebounds and 2.6 steals per game over three seasons, including career-bests of 18.4 points and 8.8 rebounds last season when she led the team in both categories.

"She is a U Sports all-Canadian athlete for a reason, and it's not by accident," McKay said. "It's from hard work and the type of athlete she is I expect she's going to bring that and more."

McKay's connection to Giles dates back to when the former coached Giles on the U17 provincial team that won the national championship in 2014.

"Living on Kennedy (Street), (U)Winnipeg is the back yard for me," Giles said. "Tanya has coached me … so I'm familiar with her, I'm familiar with the facilities, so coming here was my No. 1 option. It was a good fit."

Giles said she's already set goals for her and her new team.

Giles suffered a knee injury during Regina's Canada West championship loss to Saskatchewan in March, but McKay has no concerns over what kind of player she'll be when healthy again.