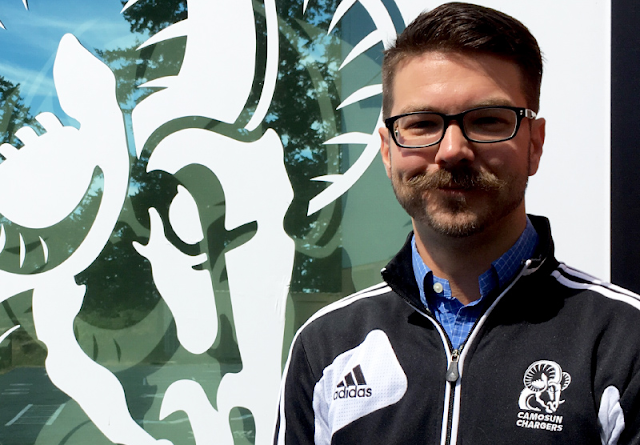 July 2019 will mark several new starts for newly appointed Chargers Women’s Basketball Head Coach, Justin Thiessen, who will be tying the knot with his fiancé on the 20th and setting up residence in Victoria later this month.

Coach Thiessen comes to Victoria from Suzhou, China where he started a successful club basketball business three years ago.

“Alien Basketball Club has grown to over 170 athletes,” said Coach Thiessen. “I’m still connected with the club, but we’ve now merged with another company and they’ve taken over the management of the program.”

Thiessen was born in Manitoba and grew up in MacGregor, a community 80 kilometres east of Brandon. He earned a Bachelor of Education at Brandon University and received his Masters in Coaching Studies in 2016 from the University of Victoria. He is currently working towards a Masters in Business Administration.

This past Christmas, Thiessen and his fiancé, who hails from Maple Ridge, made the decision to move back to Canada and agreed that Victoria was where they wanted to settle. Originally focused on finding work as a teacher, Thiessen heard about the Head Coach position at Camosun while still in China from one of his former assistant coaches.

“I felt it was meant to be,” said Thiessen who has made strong connections with the local basketball community. “My priority is to let people know that I’m here so we can build the strongest team possible for this year and for the future. I’m looking forward to showing people that you didn’t have to play at a high level to run a high level program and I want to go to the National Championships.”

Despite having only two months to put his program together, Coach Thiessen can rely on a core group of returnees to lead the Chargers into the 2019-2020 season. Over the past two years, the team finished as silver (2017) and bronze (2018) medalists at the PACWEST Provincial Championships under former Head Coach, Cait Haggarty.

Those interested in trying out for the Chargers Women’s Basketball team or joining the coaching staff may contact Coach Thiessen at coachjustinthiessen@gmail.com.