Basketball Manitoba Elects New Board of Directors for 2019-20 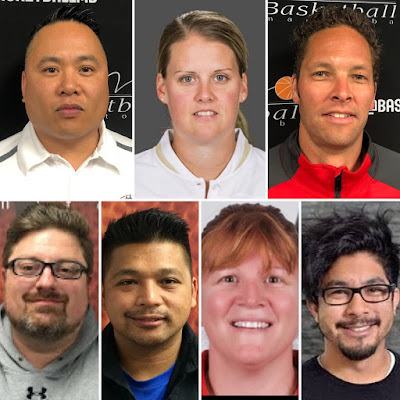 Basketball Manitoba hosted its 43rd Annual General Meeting on Tuesday, June 11 and the evening saw the transition of its Board of Directors to add 3 new members join the group for 2019-20.  Thank you to Dirk Leavesley, Edwin Garing and Tanya MacKay (pictured in order above, second row) who are leaving the Board for all your ongoing and continuing contributions to the sport of basketball!  Replacing after the AGM election by the membership is Ron Guinto, Michele Sung (Hynes) and Mike Weekes (pictured in order above, first row) who are very active members of the basketball community in a variety of roles.  Re-elected to another 2-year term in Chino Argueta who was also named as the Association's new Vice President (pictured last, second row).  Appointed by the new Board was Ross Wedlake in the role of President and James Dark in the role as Treasurer.

The full Basketball Manitoba Board of Directors for 2019-20 will be... (VIEW BOARD BIOS)

The meeting also saw the formal presentation of the 2018-19 Basketball Manitoba Audited Financial Statement and a number of other reports from the Directors and Staff.  All documents presented at the AGM can be found below.  A new Notice of Motion that was passed unanimously will now see the Manitoba Aboriginal Sports and Recreation Council (MASRC) hold voting privileges at all future Basketball Manitoba Annual General Meetings.

To close the evening, the group openly discussed a number of items currently facing the sport including coach education and development.

You can view the entire AGM Package that was distributed at the meeting below
or by CLICKING HERE...