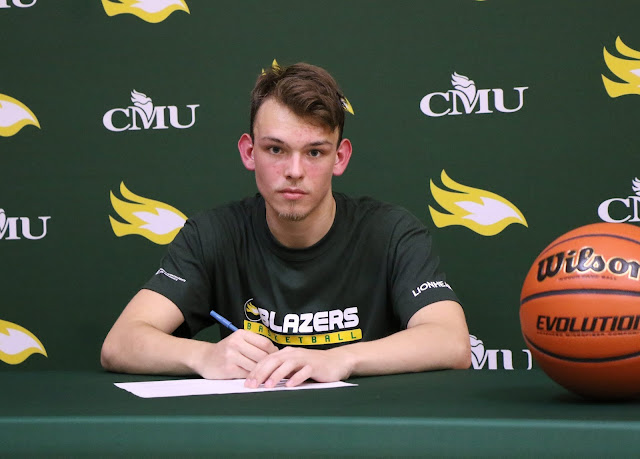 Seth Puddicombe, a 6'0 guard from Portage Collegiate in Portage la Prairie, has signed his letter of intent to join the CMU Men's Basketball program for the 2019-20 Northern Intercollegiate Athletic Conference season. Puddicombe has been a key figure in the emergence of the Portage Trojans as a legitimate Manitoba High School 'AAAA' Tier 2 Boys championship contender during his time with the varsity program, leading his school to a third-place finish in 2019 – their best finish in varsity boys basketball to date.

"Seth is a fierce competitor and I am happy to see he will pursue his basketball career after high school with CMU," said Puddicombe's high school head coach Sean Hopps. "Seth played a major role with our team this year and was the primary reason we were able to succeed. We relied on him in big moments to make big plays and get defensive stops – roles that he thrived in. He isn't afraid to defend any position on the floor."

A highlight of his Grade 12 season was a come from behind victory over the then undefeated Margaret Barbour Trojans at the Portage Collegiate home tournament. After trailing by as many as 25 points in the third quarter, Puddicombe led his team back with a 28 point, 10 rebound effort that included 8 made-threes to give his team an 85-83 win. Puddicombe would go on to earn a tournament allstar selection.

Hobbled by an ankle injury, Puddicombe still managed to put up 17 points in the Tier 2 third-place game to help Portage defeat Winnipeg's Churchill Bulldogs 67-54. He would add 8 rebounds and 5 assists in the contest to end his high school career averaging 13 points, 6 rebounds and 6 assists in his senior year. Puddicombe was voted Portage's Junior Varsity MVP in his Grade 10 season and Varsity Rookie of the Year in his Grade 11 season.

"Seth is an outstanding passer who sees the floor very well," said Puddicombe's new CMU head coach Scott Martin. "He looks to be a player who can contribute for us at the point guard or two guard position and I am very happy to have him on board."

Beyond his high school career, Puddicombe represented Manitoba Central at the 2015 Manitoba Summer Games in Steinbach and has been a part of the Junior Bisons club program.

Puddicombe and the Blazers open their 2019-20 preseason with a trio of non-conference contest in Alberta beginning with the St. Mary's University Lightning on October 4th, Ambrose University Lions on October 5th and Olds College Broncos on October 6th.