Breakthrough Basketball of Cedar Rapids, Iowa has announced they will be hosting a Shooting basketball camp for boys and girls grades 5-12 on July 16-18, 2019.  The 3-day camp will take place at Red River College and led by one of their camp leader Kyle Miller. 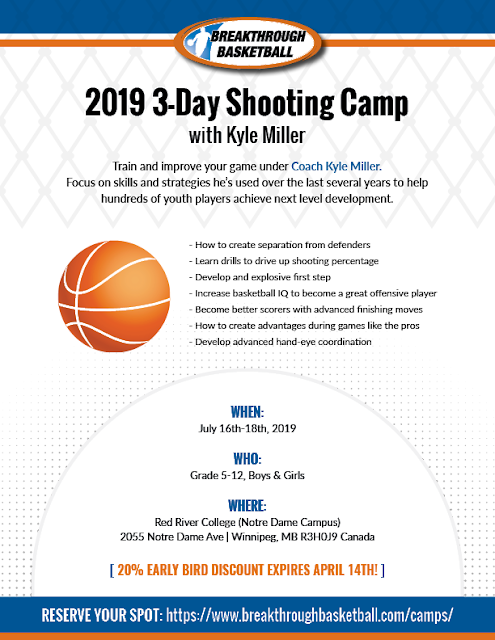 What will players get out of the camp?

Foundation of Shooting
This is the first step in becoming a great shooter. Some players will progress through this stage quickly, while others will need to spend a bit more time to correct some bad habits. You will also learn:

Shooting Off of the Catch Like Steph Curry, Klay Thompson and Kevin Durant
After we have built a great shooting foundation, we will progress to shooting off of the catch. You will learn:
Shooting Off of the Dribble Like Russell Westbrook & Kyrie Irving
As the levels go up, it's very important to add a pull up jump shot off of the dribble. This gives you the ability to score as defenders rush out to defend the initial shot. You will learn:
Learn Advanced Shooting Techniques Used by the Pros


Who is Kyle Miller?