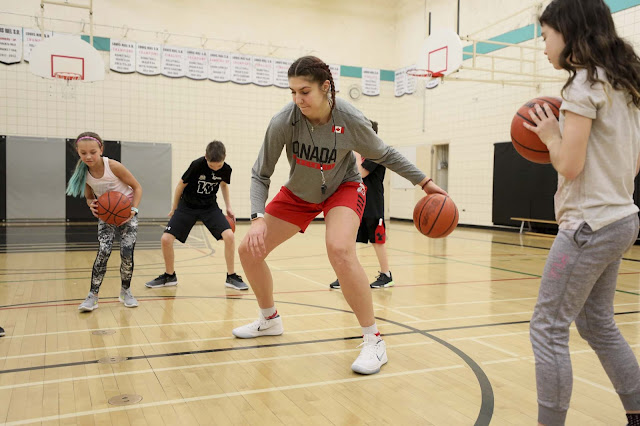 TORONTO, ON (May 24, 2019) - Canada Basketball has announced the 27 athletes invited to attend the Senior Women's National Team Program Assessment Camp from May 26-June 1 at the Saville Community Sports Centre in Edmonton, AB.


Manitoba's Emily Potter is one of those athletes invited.  Emily heads to Edmonton after a successful role as basketball ambassador as part of the Basketball Manitoba School Visit program where she interacted with over 16,000 Winnipeg area students.  Read more about Emily...

“This phase is the start of what will be our final push towards qualification for the Tokyo 2020 Olympic Games,” said Lisa Thomaidis, Head Coach, Senior Women's National Team.  “We are excited to see how this group will work together to develop the chemistry on and off-the-court that is necessary to be successful on the international scene.”

“We are looking forward to our exhibition series in Brussels and Manchester and for our senior athletes to gain international game experience against world-class talent as we play against Belgium, China, Spain and Great Britain,” said Denise Dignard, Director Women's High Performance.

While in the City of Edmonton, Canada’s Senior Women’s National Team will continue to work to grow the game of basketball both on the court and in the community.

Next week, members of the team will be visiting local students at Spruce Grove Comp High School, Victoria School of the Arts, John Maland High School and Archbishop Joseph MacNeil Catholic School for drills and on-court activities, question and answer sessions as well as photo and autograph opportunities.

In addition, Canada Basketball will be holding a coaching clinic at the Saville Community Sports Centre on Sunday, May 26.  The clinic will be run by Mike MacKay, Canada Basketball Performance Manager, Women's High Performance and is open to coaches across Alberta.  For additional information and to register, visit gameplanbasketball.ca.

On Thursday, May 30, coaches from Alberta universities and colleges will have a professional development opportunity to observe and interact with Canada Basketball’s world class Performance Analyst and Sport Scientist.  Those participating in the performance analyst stream will have the chance to watch the coding of practice video for team / player analysis and future observation.  The Sport Scientist stream will monitor training load measures live in practice for analysis and application of training load prescriptions during training camp.

Team Canada will also be in attendance at the Expo Centre on Friday, May 31 when the hometown Edmonton Stingers take on the Saskatchewan Rattlers at 7:00 PM.  Don’t miss your chance to come and meet Team Canada. Tickets available at thestingers.ca

Entering the tournament as two-time defending FIBA AmeriCup champions, Canada will look to make it three straight this September at the FIBA Women's AmeriCup 2019. Canada has found a spot on the podium in seven of the last eight competitions dating back to the 2003 FIBA Americas Championship for Women in Culiacan, Mexico.

Looking to defend their gold medal from the 2015 Pan American Games in Toronto, Canada will also be participating in the Lima 2019 Pan-Am Games (August 6-10).  Canada is one of only three countries (Brazil, USA) to have participated in every Pan Am Games tournament since 1955, earning a gold, a silver and three bronze medals in 15 appearances.  Additional details regarding Canada’s Pan-Am Games team will be announced at a later date.

A full list of athletes, coaches and team schedule can be found below.