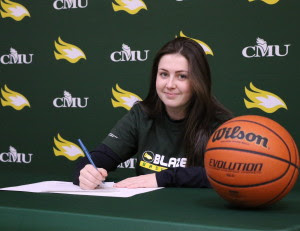 After a Final Four finish in the 2019 MHSAA 'AAAA' Girls Championship with her River East Kodiaks, Morag de Koning has made her commitment with the CMU Blazers for 2019-20, taking her well-rounded high school skills into the Northern Intercollegiate Athletic Conference.

"it's really exciting to be getting a player like Morag, with such a high basketball IQ," said CMU head coach Joe Di Curzio. "Morag has played for many successful club and high school teams. She has developed an excellent skill set and performed extremely well while playing against top-notch competition. She is known as a knock-down 3-point shooter and has terrific leadership qualities and work habits. She's a great fit for our the culture of our program."

Awards and accolades have followed the 5'7 KPAC All-star during her high school and club basketball career. De Koning earned MVP honours at the John Piper Classic and Western Canada Tournament and was also recognized as a Tournament All-star at the 2019 Kildonan East Tournament during a Grade 12 season with the Kodiak that saw her average 18 points per game to go with 5 assists and 3 steals.

"Morag was the key to our success as a basketball team over the past four years," said Kodiaks head coach Diana Posthumus. "Morag is an excellent defender, contributes offensively, sees the floor and has an extremely high basketball IQ. She has demonstrated a strong commitment to her teammates, her coach and is a positive influence on those around her."

De Koning was selected the River East's Athlete of the Year to the end of her Grade 11 year in 2018 and will finish Grade 12 as a 'AAAA' Graduating All-star in Basketball Manitoba Graduating All-star festivities this weekend at St. Paul's High School.

Splitting her club basketball career between Manitoba Magic and Winnipeg Wolves, de Koning was a part of Provincial Championship wins in 2015, 2016 and 2017 and also won the Volvo Swoosh Tournament in Edmonton in 2017. Last season, de Koning led Wolves to the Consolation-side Championship at the 2018 Canadian Club Nationals in Vancouver.

"Morag has excellent range and can shoot the ball deep," said Wolves' coach Martin Riley. "Her team was highly successful due to her skill set; specifically her shooting ability. In all my years coaching against her (when she was playing with Manitoba Magic), and now having coached her, the most valuable attribute is her basketball IQ. She gets more rebounds and steals than most of the other players who are faster and taller than her because she really understands the game."