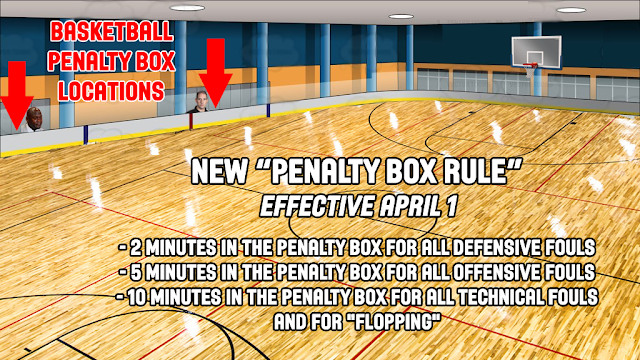 Basketball Manitoba today announced a new rule that will take into effect at all levels of the game beginning April 1.  The new "Penalty Box Rule" will be added as a new disciplinary action for all fouls called in a game.  The new penalties for the following infractions include:

Similar to how hockey manages their penalties, once a player is called for an above-noted infraction, that player will be sent to the penalty box and their team will play short-handed for the duration of the noted time.  Should another foul occur while shorthanded, fouling players will continue to be sent to the "sin bin" until there are no players left on the court.  Should this occur, the opposing team will revert to "lay-up lines" and continue to score undefended until the penalty times have expired.

"We feel this is a great step forward for the sport of basketball as we can all see how this rule has greatly cleaned up the sport of hockey with virtually no rough play in their games," commented Basketball Manitoba's Adam Wedlake.

In the meantime, facilities can use a folding chair placed beside the score table however, the chair must be placed facing the wall.  It was felt that a player who has to face the wall to serve their penalty will be able to better reflect on their mistakes and come back to play with a new perspective on the game.

With the new full boards being added to the sport of basketball, it is advised that all players continue wearing a basketball helmet that was added to the rules in 2011.

The research on this new rule was done by consulting firm Yad Sloof and Lirpa.