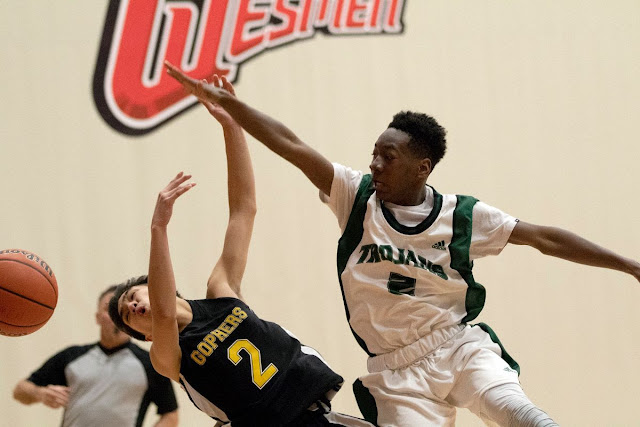 The Vincent Massey Trojans stormed out of the gates and never looked back in claiming the JV boys championship of the 52nd annual Wesmen Classic on Thursday.

Tournament MVP Elijah Grant had 18 points and the Trojans, who opened the game with a 12-0 run, beat the Garden City Fighting Gophers 82-63 at the Duckworth Centre.

Victor Lepa had added 17 points for the Trojans, who led 15-2 and weathered a couple of Gophers charges but maintained a double-digit for virtually the rest of the game.

Tendo Kasule had 11 points and Khalil Depeazer added 10 points for the Trojans, who led 37-26 at halftime.

Keishawn Saysana hit four three-pointers on his way to 15 points for the Gophers, who closed the third quarter on a 7-0 run to cut the Massey lead to 11. Tournament all-star Quelex Maclang led the Gophers with 16 points on the night.

Massey's Quadri Akinwande had nine points in the final and was also named a tournament all-star.

Theodore Karahalios of St. Paul's; Matt Foreman of Dakota and Logan Kraus of Sturgeon Heights rounded out the tournament all-stars.

The JV tournament was a prelude to the university women's draw that kicks off at 2 p.m. on Friday.

The Wesmen women's team will play UBC-Okanagan at 6 p.m. in the quarter-final round.