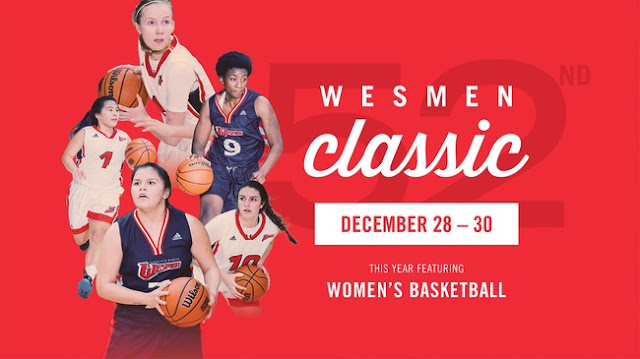 The 52nd annual Wesmen Classic will feature women's basketball for the first time as the four-year cycle format through all our court sports continues.  After a successful men's volleyball tournament in 2017, women's basketball takes centre stage for a three-day, eight-team bracket format tournament.

The Wesmen Classic is going back to basketball in 2018.

For the first time ever, the University of Winnipeg's annual holiday tournament will feature women's basketball when it tips off Dec. 28-30 at the Duckworth Centre.

Eight teams will showdown in a bracket tournament that continues the four-year cycle format for the Classic, an initiative that was originated in 2017. After a successful men's volleyball tournament last year, the tournament features a Wesmen women's team for the first time.

The Wesmen, winners of three of their last four Canada West conference games, will draw the UBC-Okanagan Heat in one of four first-round games on opening night.

The other match-ups from the first round on Dec. 28 are:

A women's basketball tournament was played in the classic in the 80s and 90s, but as a smaller event. This is the first time the sport will be the main fixture of the Classic.

Longtime Wesmen head coach Tom Kendall will return to Winnipeg to be celebrated as our tournament Guest of Honour. Kendall presided over the winningest era of Wesmen women's basketball, including the famous run of 88 straight.

"There's definitely some special moments over the years," said McKay, who has played and coached in the tournament. "Every year's a different year, and this year is a special group and we're really looking forward to the Wesmen Classic.

"... As a former player and alumni of the program, I remember the days when we played in the Classic, and it was very special. The stands were full and just the feelings of playing in the Wesmen Classic was amazing. And now our team has the opportunity to be featured and our kids have the opportunity to play in this huge event in front of their home fans. So I think it's a tremendous opportunity."

Tournament passes are available in advance or at the door for $25, which gains access to all 12 games in the university draw.

Day passes are also available for $10 for Friday and Saturday and $12 for Championship Sunday.

Wesmen Athletics is also excited to announce the installation of the Wesmen Ring of Honour, a new permanent feature that will be unveiled during the tournament. In 2018, Wesmen Athletics will induct four people pivotal to the history and successes of our U of W teams and at halftime of the Wesmen game on Dec. 28, Kendall and former all-Canadian star Sandra Carroll will be the first two individuals inducted into the Ring of Honour. Volleyball's Mike Burchuk and Diane Scott will go in at a later date as part of the inaugural class.