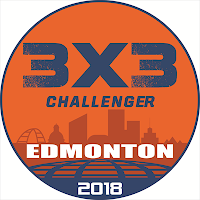 WATCH LIVE ONLINE: Team Winnipeg AP is off to the FIBA 3x3 Challenger tournament in Edmonton, Alberta this weekend as part of their competition plans in the ever-evolving world of FIBA 3x3 basketball.  Challengers are set up around the world as another opportunity to compete against the top 3x3 teams in the world.  This event has a $20,000 top prize and features 15 other teams from around the world including the US, Europe and Asia.

Team Winnipeg AP members include Wyatt Anders, Jelane Pryce, O'Neil Gordon and Ayob Ayob.  The tournament will be taking place on a special basketball court built on the ice surface at the West Edmonton Mall.

Team Winnipeg AP won the Manitoba stop of the Canada Quest 3x3 tourney back in June and has since competed in the Saskatoon Wolrd Tour and a number of other large-scale events in Europe.  Each team member is ranked in the top 10 in Canada based on their overall FIBA ranking points.

All games will be live streamed on the FIBA 3x3 YouTube channel.

CONGRATS AND GOOD LUCK TO TEAM WINNIPEG IN EDMONTON!