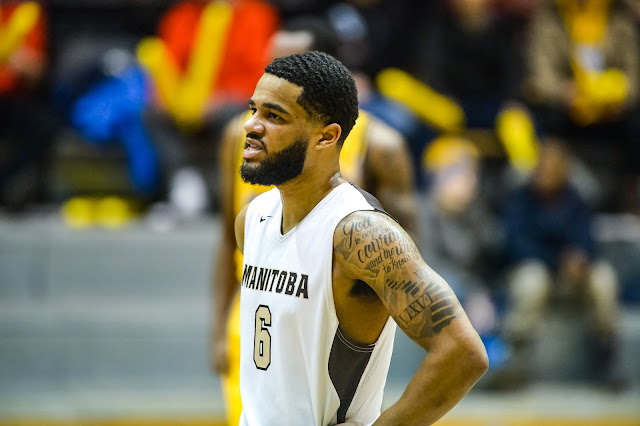 Justus Alleyn, last year's Bison Male Athlete of the Year was one of the best to go through the Bison men's basketball program, and will take his talents overseas.

The 2017-18 Bison Male Athlete of the Year was selected to Team Canada's roster for the 2018 Commonwealth Games in Australia this past April, earning a silver medal alongside his U of M head coach, Kirby Schepp. The medal was Canada's first in men's basketball at the games and garnered Alleyn plenty of attention from professional agencies.

Ultimately, he chose an agent based out of Spain who also represents a few other Canadians.

"It was pretty much a waiting game," Alleyn says of the process of getting his first pro deal. "My agent sent out a lot of film and contacted a bunch of teams. It was just waiting to hear back from them until I started to get some offers."

In early August, Alleyn put pen to paper, signing with NH Ostrava. The team plays in the Czech Republic National Basketball League, which is the highest level of professional ball in the country.

The former Canada West First Team All-Star left Winnipeg on Saturday, Aug. 4, and started training camp two days later. The team's first pre-season game is Sept. 4 and the first league game is Sept. 30.
Alleyn's says that Schepp's coaching style with the Bisons has helped him immensely in being able to adjust to the European professional ranks right away.

"A lot of teams in the States play more iso-ball, whereas here it's more team-ball with pick-and-rolls," he says. "The way [Schepp] coaches is that European style. He wants to play really fast-paced, shoot a lot of threes and move the ball around well. So it was an easy transition to come from playing in a system like that to playing out here."

Schepp commended Alleyn for his work ethic and professionalism while with the Bisons – something that he feels should translate well at the pro level.

"He's a guy who all five years put in the time, and especially in the last few years, really adopted a professional mindset," the head coach says.

"It's commonly said that you act like a pro before you become a pro and that's very much Justus. He treated every day like he was a professional while he was here, and that resulted in him moving on and achieving that goal of going overseas. I'm sure he's going to have a great career in the Czech Republic and we wish him the best of luck."

Alleyn also reached out to fellow Bison alumni AJ Basi, Keith Omoerah and Ilarion Bonhomme for advice on how to adjust to life in a new country. All three players recently finished up their first year of professional basketball in 2017-18.

"They've given advice on little things like stretching and nutrition, but it's mainly just been them sharing their experiences on stuff they went through, whether it be highs or lows and how to deal with it and stay motivated," he says.

The age demographic on the team ranges anywhere from 18-30 years old. Alleyn says his short-term goal is to prove himself at the pro level while also soaking up as much knowledge as possible from some of the veteran players.

"For me I'd say it's getting my foot in the door as a pro and proving myself at this level, because a lot of teams, they don't care what you did in college or where you played. They want to see what you can do against other professionals in a pro league," he says.

"My goal this year is to show what I can do and learn as much as I can from the older guys."