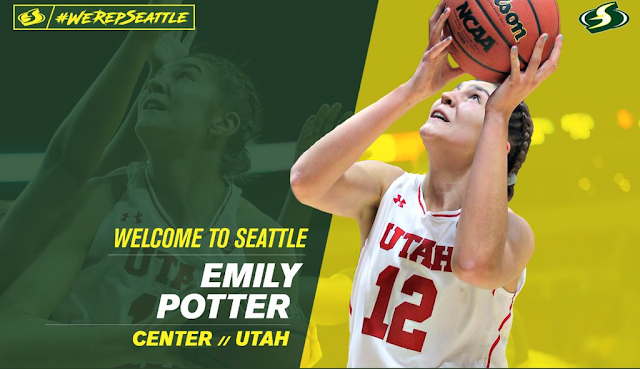 SEATTLE – The Seattle Storm today announced that Emily Potter and Khaalia Hillsman have signed with the franchise, bringing the team’s training camp tally to 16 players.  This marks the first time in Manitoba basketball history that a player from Manitoba has signed a contract with a WNBA franchise. 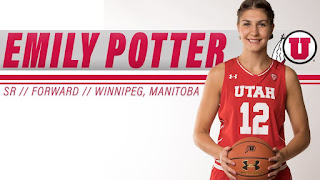 Emily Potter was a defensive stopper while playing for the Utah Utes. The 6-6 Canadian left the program boasting school records in single-season (89) and career blocks (215), and she was the first player in Utah women’s basketball history to register 1,500+ points, 1,000+ rebounds and 200+ blocks in a career. During her senior season, Potter was named All-Conference and All-Defensive honorable mention by the Pac-12 coaches, and she capped her college career ranked 11th in scoring (1,635) and fifth in rebounding (1,037). Potter’s final three seasons at Utah saw the Utes make consecutive trips to the WNIT, including a third-round appearance in 2016.

“I am so excited to have this opportunity with the Storm,” said Potter. “I’m feeling very thankful right now that I get to try out for the Storm and play with and meet amazing women. I can’t wait to learn new things from the coaching staff and just have fun doing what I love.”

All I can ask for is an opportunity 🙏🏼 headed to WNBA training camp next week. #seattlestorm
A post shared by emily☀️POTTER (@empotter10) on Apr 18, 2018 at 5:34pm PDT

“Playing in the WNBA has long been a dream of mine,” said Hillsman. “Being able to compete against the best players in the world is the opportunity of a lifetime. Coach Dan Hughes is a legend, and I can’t wait to soak up knowledge from him and the entire Storm coaching staff.”

Seattle added two in the 2018 WNBA Draft presented by State Farm on April 12, selecting 5-6 guard Jordin Canada from UCLA in the first round (fifth overall) and Teana Muldrow, a 6-1 forward from West Virginia in the third round (29th overall). The Storm also signed Brittany McPhee out of Stanford to a training camp contract on April 16.

The Storm tips off the 2018 slate against the Phoenix Mercury on May 20 during Opening Night presented by Swedish, with start time set for 6 p.m. PT at KeyArena. The first 3,000 fans in attendance will receive a Sue Bird bobblehead to celebrate her league record-breaking assist last season at Washington, and her game-worn jersey from that contest will also be on display, allowing fans to take photos and capture a visual taste of WNBA history.