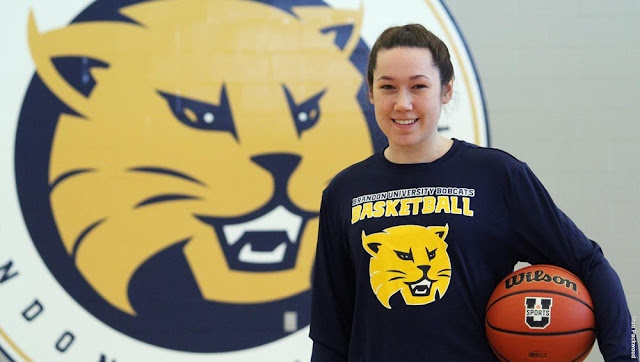 Russell, a soon to be graduate of Chestermere High School where she was a stand-out guard with the Lakers basketball program, committed to the Bobcats after a recent campus visit. Having had the goal of playing at the university level since junior high, Russell jumped at the opportunity presented by Coach Thomas.

"It's always been my goal to play at this level, so that was my number one driving motivation. Coach Thomas has been recruiting me for the last year, and Brandon is a very nice city. It's a little far from home but that's something I was actually looking for, so I'm just really excited," says Russell.

Russell brings speed and a tremendous basketball IQ to the Bobcats, as well as an incredible work ethic. It was after Russell reached out to Thomas last fall that the dialogue continued over her grade 12 year.

Thomas notes Russell's hard work over the course of high school hoops career at Chestermere High as a catalyst for her making the jump to the university level.

"She reached out to us early in the season and after watching her game film and learning about her character it became obvious to me that it wasn't just lip service and she stood behind all the values that she indicated, which is exciting to see," says Thomas following Russell's recent campus visit.

"Her commitment to academics, her approach to life, sport and training, and her overall attitude are all things that I'm just really excited about. Her character, her mindset and her commitment and perseverance have all helped her thus far and I'm confident will continue to help her in the future," Thomas adds.

Russell will graduate from Chestermere this June after leading the Lakers to an appearance in the Alberta Schools Athletic Association (ASAA) 4A provincial championship. Russell also impressed at the Alberta Shooting Stars Basketball Showcase where she captured the three-point shooting championship.

"I'm really looking forward to being fully immersed in the culture that is basketball at this level. I've been looking forward to this opportunity and the girls on the team that I've met have been great to me. I think the atmosphere here will be amazing, and obviously the basketball is something I'm very excited for," Russell adds.