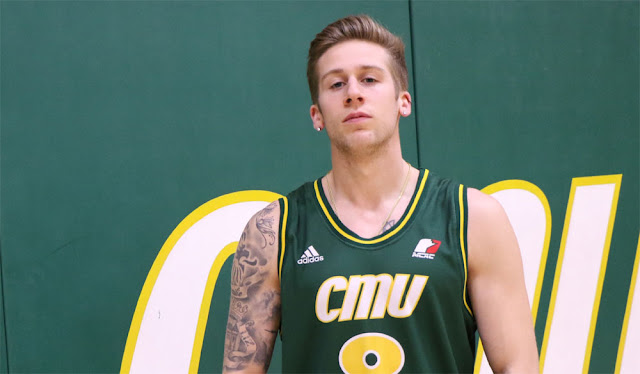 CMU rookies rarely take on the shape of Men's Basketball's most recent signing Ty Venderbos. The 2012 Transcona Collegiate graduate, who describes himself as a "grinder" on the basketball court, is certain to be the kind of player that will make an impact on his new team.

Though never having an opportunity to compete for the 'AAAA' High School Championship at his Tier 2 high school, Venderbos was recognized in his senior year as the only Tier 2 player selected to participate in the KPAC All-Star Game.

"Ty plays with a very high motor, running the floor for easy baskets or grabbing rebounds," said head coach Billy Isaac, "the first time I saw him play, I was immediately drawn to his level of intensity on the court."

The 6'3 wing grew up in the sport at Oxford Heights Community Club and has been a regular "gym rat" since graduating, playing in the West Kildonan Men's League, The Fort Garry Brewing League at the University of Winnipeg, The Winnipeg Filipino Basketball League as well as regular runs at the YMCA.

Since high school, Venderbos has worked in restaurant management as well as personal training at Good Life Fitness.

The 2018-19 Northern Intercollegiate Basketball Schedule has yet to be officially released. CMU has been selected to host the 2019 Manitoba Collegiate Athletic Conference Championships in the Loewen Athletic Centre, February 8-9. The NIAC Championships will take place February 14-16 at Sisseton-Wahpeton College in Sisseton, South Dakota.