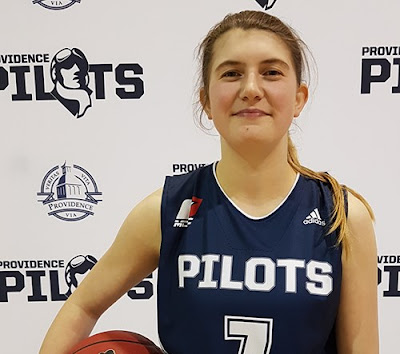 Megan Wiebe, the reigning Manitoba High School Athletic Association “A” Player of the Year, has signed her letter of intent and will represent the Providence Pilots women’s basketball team next season.

Wiebe is coming off a strong season in which she led Vita’s Shevchenko Sabres all the way to the MHSAA “A” final at the provincial tournament, where she was named Most Valuable Player. She says she is looking forward to joining a Pilots team that will return nine players from the squad that finished third at the Association of Christian College Athletics competition.

“I’m excited to start this new journey at Providence with a new group of girls,” she says.

According to Pilots head coach Joel Coursey, Wiebe will add to a “mature group” that is “highly motivated” to win next season. The 2018-19 campaign will get underway on October 13 at Mayville State University in North Dakota.

“Megan is a dedicated player who has put in countless hours working on her game,” adds Coursey. “She is incredibly passionate about basketball and the people she plays with. She is a very talented athlete and I see a great amount of potential that she has yet to reach.”