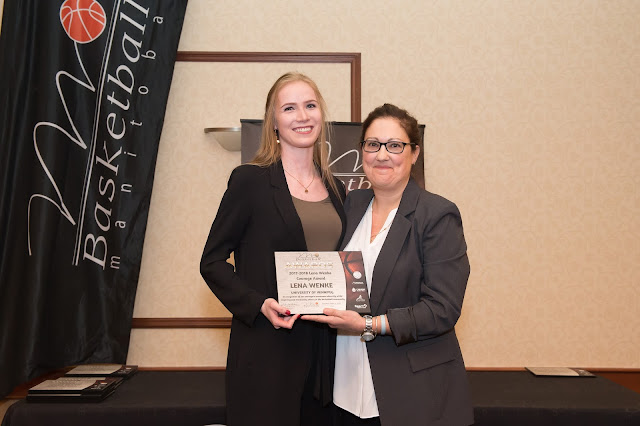 Basketball Manitoba was proud to add two new special awards to its collection of recognition awards it presented at the 2018 Basketball Manitoba Awards this past Saturday at the Victoria Inn Hotel in Winnipeg.  The two new awards included the Donovan Gayle Scholarships and the Lena Wenke Courage Award.

The Balling for the Cure Donovan Gayle Scholarship was named after Donovan, who sadly passed away last December after a battle with Leukemia.  The four $1000.00 scholarships in his memory were presented to (pictured in front with the Gayle Family from left to right) Mikayla Desaulniers - Sisler High School, Talia Peters - Garden Valley Collegiate, DeMar Kraus - Sturgeon Heights Collegiate and Autumn Agar - Fort Richmond Collegiate and will continue to have a presence at future Basketball Manitoba Awards.

In part of this scholarship and the Balling for the Cure movement, a new and dedicated website has been developed by Basketball Manitoba to help promote future initiatives and as a tribute to Donovan and his memory.  The new site can be found at http://www.ballingforthecure.ca.  Basketball Manitoba thanks the support of the Gayle family who joined us from Toronto along with organizing committee members Shaneil Lawrence and Sela Andu for being part of the event.

The Balling for the Cure Organization in Donovan's memory was also presented with the President's Award which recognizes groups in Manitoba which utilize the sport of basketball to improve the community around us.

The other new award presented on Saturday was the Basketball Manitoba Courage Award.  Lena Wenke, a member of the University of Winnipeg Wesmen women's basketball team member was honoured with the award founded in her name. She was recognized as the inaugural winner of the Lena Wenke Courage Award that acknowledged Lena's return to the basketball court after being the victim of a vicious assault in her Winnipeg home last spring.  The award, now referenced at the Lena Wenke Courage Award will be continued into the future to recognize others in the basketball community who have faced and overcome obstacles or challenges in their life while staying involved in the sport of basketball.

As part of this award, Basketball Manitoba has made a $500.00 donation in Lena's name to the Health Science Centre Foundation.

A full list of all those recognized at the 2018 Basketball Manitoba Awards can be found HERE.