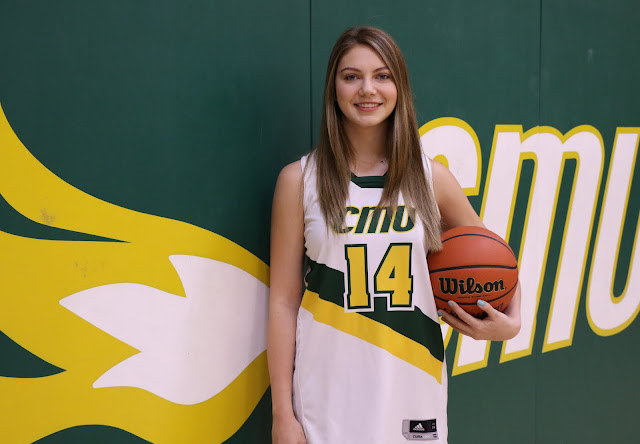 In her final high school season, the 5'11 Reivers post was selected as a Tournament All-Star at the St. Mary's Tournament and the Tec Voc Tournament.

"We are very pleased to have Keirra join our program," said CMU head coach Joe Di Curzio. "She is an excellent athlete who is constantly working to improve her game. I expect Keirra to be a strong inside presence for us next season. She has an excellent inside offensive game and she adds to that strong rebounding. Defensively, her length and quick feet allow her to influence alot of shots."

Skolnik's Kildonan East high school coach, Curt Bauer, speaks very highly of his soon to be graduate, and believes that she is ready to make the next step in her basketball career when she joins the Blazers next season; "Keirra is a passionate player that has shown tremendous growth during her high school years. I look forward to seeing her progress as a player at CMU," said Bauer. "Keirra is a strong post player that presents many challenges for the opposition. She has wonderful footwork around the basket, has developed range in her shot and is a solid rebounder and shot blocker."

Skolnik was a member of Winnipeg Gold at the Manitoba Games in 2016 playing alongside future CMU teammate Kayla Dao who's Sturgeon Heights Huskies meet the Oak Park Raiders this Thursday evening in the 2018 MHSAA 'AAAA' Girls Provincial Semifinals at The University of Manitoba's Investors Group Athletic Centre. Skolnik's coaches with Winnipeg Gold also have CMU roots. Aimee Van Dam played for the Blazers in 2008-09 and Wyatt Anders suited up for the Blazers for two seasons, 2010-11 and 2011-12 before moving on to star for the Manitoba Bisons.