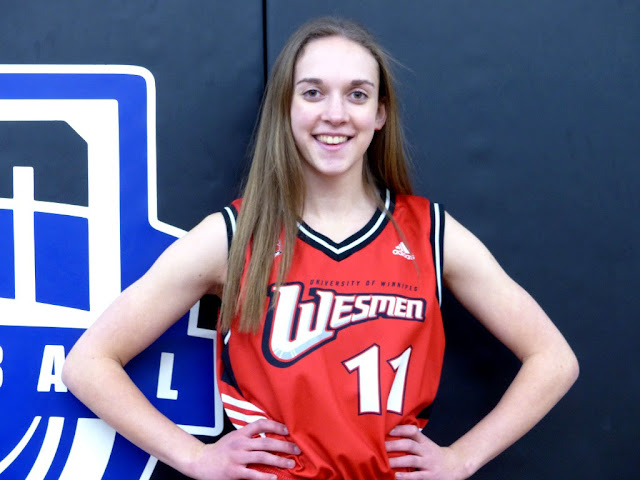 Tanya McKay is barely into the off-season, but she’s already gotten to work on adding to next year’s Winnipeg Wesmen women’s basketball team.  The head coach announced the formal commitment of Calgary’s Rayna Anderson, a 5-foot-7 combo guard out of William Aberhart High School, who brings to three the 2018 recruiting class for McKay’s Wesmen.

Anderson joins previously-announced recruits Mikayla Funk of Winkler and Deborah Nkiasi-Kuku from Vincent Massey Collegiate.  In Anderson, McKay believes she has another high-IQ perimeter threat to potentially absorb minutes in the backcourt.

“She is a young basketball player with experience and a drive to excel,” McKay said. “She has an unbelievable work ethic, she has a great skill set that she’s defined through her high school and her club programs. We’re looking forward to her coming in and bringing that determined, work-hard mindset and to step in and help our program.”

Anderson averaged 22 points, 11 rebounds and five assists per game for the Orange, and also played club for Genesis Basketball. A 92 per cent student, Anderson will study Exercise Science at U of W.

For her part, Anderson believes she can add to the perimeter threat for next year’s Wesmen, saying she has “a knack” for shooting, while this season taking on a greater responsibility to attack the rim.

“This year I think I really had to step up and I think I’ve done a really good job of just being a little bit more aggressive this year,” she said.

McKay sees Anderson having a chance to carve out a role early on.

“I think she’ll be ready to play,” McKay said. “I think whether she starts or comes off the bench I think she’s a kid we can count on to hit that open three off penetration or be able to play off the post and pitch it back out to her. I think we can count on her to be ready for those moments, and I think she’s only going to get better once she’s with us.”

Anderson comes from a basketball family, her mother Sharon and father Craig were both post-secondary basketball players who helped foster the love of the game in their daughter since she first started playing in Grade 7.

“I just grew up in a basketball family, and although I started playing late, sports were always very important to me and since I’ve started playing seriously I’ve wanted to take that step and play university,” she said.

And she’ll get that chance in Winnipeg, where she’ll join a team that stands to lose only two players from last year’s squad that went 14-6 and won a playoff game. In the past two seasons, the Wesmen are 32-8, and Anderson said the culture of the Wesmen program is one of the things that attracted her to the team.

Anderson also enjoyed the rapport she had with McKay, which started almost immediately after she reached out to the coach in May 2017.

“She was one of the first coaches that got back to me and I really, really liked how quick she was to contact, and when she came to Calgary to work out with me and she gave me some really good feedback, so I thought we were a good match that way,” Anderson said. “I felt in that time that she would be a really good coach for me and that’s when I started considering it.”