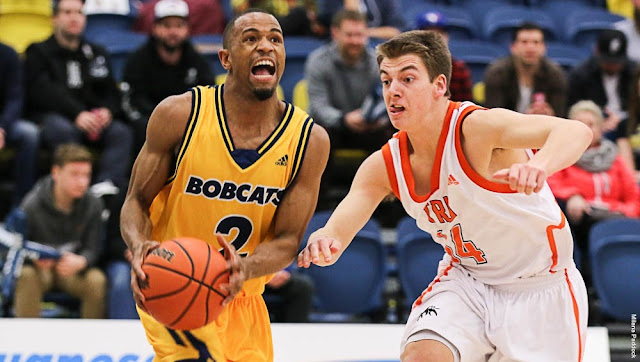 The Middletown, N.Y. product put on a solid offensive show while leading the Bobcats back to the playoffs for a second straight year.

He reached double digits in all 20-conference games and scored 20 or more points in 10 of those contests.

"It is a team sport, it is never just me out there," said Cooper. "My teammates put me in a good position to be effective on the court and they deserve a ton of credit. They always find ways to help me improve as a player and the coaching staff also deserves a big pat on the back."

Cooper's 2017-18 conference award is one step up from last year when he was named a third-team all-star.

"Tyvon is the hardest worker we have and being selected to his second straight all-star team is a testament to the hours he puts in," added Cheung. "I know he is more proud of leading us to back-to-back playoff appearances more than any individual accomplishment, but he definitely was a standout in Canada West.

Cooper's most dominating performance came against the Manitoba Bisons on November 24 when he recorded a rare triple-double in BU's 88-85 overtime win. He nailed a buzzer-beat three-pointer in the extra frame to power the Bobcats to victory. Cooper also collected another three double-doubles during the season.

Canada West has Cooper's name listed among the league leaders in a host of categories including sixth in scoring at 20.2 points per-game.

He also had a league-leading 94 free throws and his 84.2 percentage was eighth best in the conference.

The Bobcats leaned on Cooper a ton in clutch situations and his total minutes played were sixth most in Canada West.