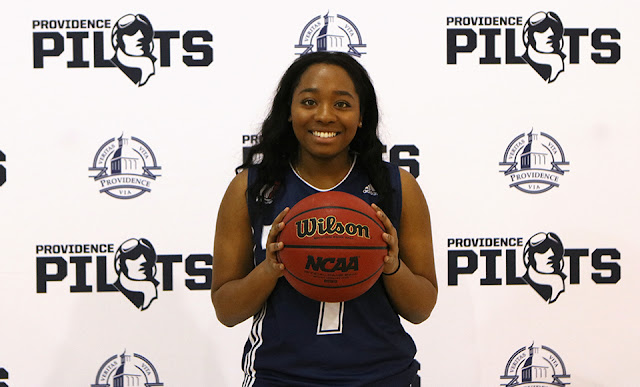 Amei Grant says her decision to join the Providence Pilots women’s basketball team for next season was a “very easy” one.

“The moment I walked in I felt welcomed,” she says, describing a recent visit to the Otterburne campus. “I had the chance to meet a few of the girls on the team who were very cool, funny and very welcoming. I am beyond excited to be playing a sport that I love at a higher and more competitive level!”

For Pilots head coach Joel Coursey, the decision was also a no-brainer.

A 2017 finalist at both the Tier 1 and Provincial AAAA levels, and a 2016 Power Smart Manitoba Games Gold Medalist, Grant is described as a “strong scoring force” and an “inside-outside player who can shoot the ball outside or power it up at the post” by her Vincent Massey varsity coach, Stacy Hawash.

“I see a motivated competitor with strong fundamentals, ready to contribute at the college level,” remarks Coursey. Amei will be a great addition to an already strong core of returning players. Today is a big day for the Providence Pilots women’s basketball team.”

Randy Kusano, a high performance coach with Basketball Manitoba, previously coached Grant for three years in Basketball Manitoba’s Centre for Performance. He says the 5’5” guard is “a wonderful young athlete with a huge upside” who has improved every year and is excelling in her Grade 12 season at Vincent Massey. “She is a hard worker who is just beginning to realize her potential,” he adds.

The University of Manitoba’s Junior Bisons director and senior men’s assistant coach Herve Vincent also speaks highly of Grant, whom he hails as a “lock-down defender and a great athlete” with “solid perimeter skills.” He says Providence is “lucky” to have recruited her.

Adds Grant: “Attending Providence will be the next big chapter in my life.”