Debbie Nkiasi Commits to University of Winnipeg for 2018-19 Season University of Winnipeg Wesmen Athletics has announced that Winnipeg native Deborah Nkiasi-Kuku has committed to join the women's basketball program for the 2018-2019 Canada West season beginning in September 2018. 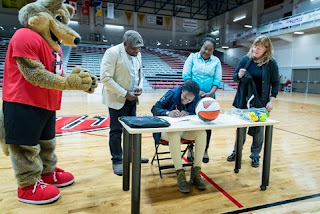 Nkiasi-Kuku, a 6-foot forward from Vincent Massey Collegiate in Winnipeg, averaged 10 points, five rebounds and three steals per game last season under head coach Stacey Hawash.  The Trojans finished last year's basketball season runners up at the Manitoba 4A provincial championship and are looking to continue their success this high school season.

"Deb is very intense and competitive," Hawash said. "She is the type of player that is willing to do anything for her team. Hard working on and off the court."

Nkiasi-Kuku also played a vital part in leading Team Manitoba to a bronze medal at the Canada Summer Games this past summer, securing a Bronze Medal for the host province.

"Deb was a positive force and leader among her teammates.  Her rebounding and strong defense inside made her a presence in the paint," provincial team coach Alyssa Grant said. "Debbie is very talented and athletic with a great post-up game. She is constantly striving to develop her offensive game and has only begun to scratch the surface of her potential."

Head Coach Tanya McKay believes Nkiasi-Kuku has the potential to join the Wesmen family next year and have a presence right away.

"Debbie is an athletic dynamic forward.  We are very excited she is joining our Wesmen Women's Basketball Team for 2018-19," McKay said. "She has the potential to step in and make an impact immediately next season."