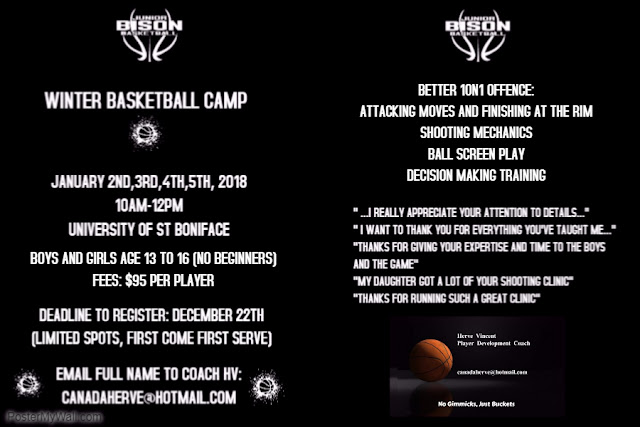 REMINDER: The Junior Bison Basketball Club has announced they will be hosting a players basketball camp on January 2-5, 2018 at the University of St. Boniface for boys and girls ages 13-16.  Fee to register is $95.00 a player with the deadline to register set at December 22, 2017 or when the camp sells out.

Coach Herve Vincent was born and raised in France where his dedication to the game began in 1988 when he joined a basketball club. He has been involved in coaching since 1997 where he started as a volunteer and became a certified coach in 2005. He earned his degrees in sociology, education and sports training at the University of Rouen (France).

He has coached and trained players at all levels, from youth to adult, at both the city and national level since 1997.  He has experience in promoting basketball via presentations in schools, community centers, university, tournaments and skill camps.

From 2006 to 2009, he worked as a technical supervisor for the youth basketball development program in the SPO Rouen professional club where he developed and implemented specific youth skills programs. He has helped develop numerous elite players from his club programs who were selected at the regional, provincial, and professional level in both France and Canada.

In 2009, he moved to Winnipeg and joined the Junior Bison Basketball Club and started his work with Basketball Manitoba's CP programs, boys and girls. He is currently still working as skills development coach for both the Junior Bison club and the Manitoba Bison Men's team since 2010. Coach Vincent is a certified Basketball coach in France (BEES 1), he is a trained coach at the Fundamentals, Train to learn, Train to Train and Train to compete levels in Canada.

To register, email your full name, gender and age as of the camp to canadaherve@hotmail.com.  Questions on the camp can also be sent to that address.