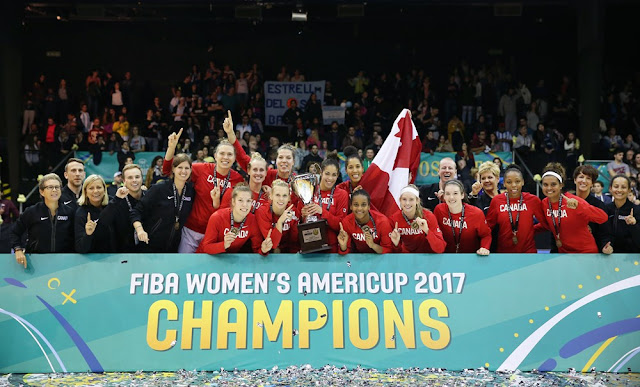 BUENOS AIRES, ARGENTINA (August 13, 2017) - The Senior Women's National Team  defeated Argentina 67-65 in the FIBA Women's AmeriCup 2017 Final Sunday night to successfully defend their FIBA Americas title.
Kia Nurse led Canada with 12 points while Miranda Ayim and Miah-Marie Langlois each had 10 points. Ruth Hamblin had nine points and seven rebounds with Katherine Plouffe and Nirra Fields chipping in seven points apiece in Canada's win.
Click here for the box score.
Canada trailed Argentina 18-14 after the first quarter. Down 34-27 at the half, Canada took the lead for the first time with a 29-13 third quarter.  A back-and-forth final frame would see Kia Nurse make a crucial jumper with 1:27 to play as Canada held on for a historic 67-65 victory.
Click here for the full team roster.
This is Canada's second consecutive FIBA Women's AmeriCup (formerly FIBA Americas Championship for Women) title after defeating Cuba 82-66 in Edmonton back in 2015.  Canada also previously won gold at the 1995 American Olympic Qualifying Tournament Tournament for Women.
Canada becomes just the second country to repeat as FIBA Women's AmeriCup champions, joining Brazil who accomplished the feat twice (2001-2003, 2009-2011).  Canada has now found the podium in each of the last five FIBA Americas competitions dating back to the 2009 FIBA Americas Championship for Women.
Sunday's victory was Canada's first head-to-head since a 77-57 win at the 2005 FIBA Americas Championship for Women and snaps a streak of two straight in favour of Argentina.

Nirra Fields was named FIBA Women's AmeriCup 2017 Most Valuable Player and was selected to the All-Star Five along with Canada's captain Miranda Ayim.  Fields averaged 14.5 points, 5.3 rebounds and two assists, while Ayim averaged 8.2 points and 6.3 rebounds in the tournament.
Canada previously clinched a berth in the FIBA Women's Basketball World Cup 2018 in Spain with a 84-45 victory over Brazil in Saturday's semifinals.
QUOTES
"This is exactly the kind of game that you dream about, the ones that go back and forth. Neither team has it secured from start to finish and those are the games that you learn so much about yourself and your team when you have an opportunity like this. And to play in an environment like this. You cannot replicate this environment.
I'm so proud of our team. We are young, we have a bunch of new players and we really weren't tested until this game. We were knocked back on our heels at the beginning of the game and we had to regroup and credit to them. We came out in the second half and built a lead and Argentina is a tough team to match up with. They spread us out and can knock down some threes. We got some great contributions from a variety of different players tonight and when it came down to it we got the stops when we needed it and got some key scores. Just a fabulous win for this program and this team in terms of kicking off the start of this squad and heading forward."- Lisa Thomaidis, Head Coach
"It feels amazing. It's the second title in a row and we are writing history. The team is feeling great and we are all celebrating. We are happy that we put in a team effort today and got the win." -Nirra Fields