Canada Makes History with Win at U19 World Cup 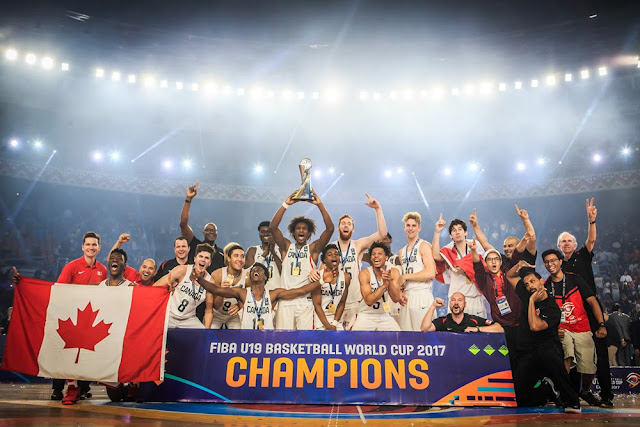 CAIRO, EGYPT (July 9, 2017) – Canada’s U19 Men’s National Team defeated Italy, 79-60, in the finals of the FIBA U19 Basketball World Cup 2017. The victory gives Canada its first-ever gold medal at an international FIBA competition.

R.J. Barrett (Mississauga, ON) led the way with 18 points, 12 rebounds and 4 assists while Abu Kigab (St. Catharines, ON) added 12 points and 10 rebounds. Nate Darling (Sackville, NS) chipped in with 12 points and 4 rebounds. Click here for the box score. Manitoba's James Wagner was named an alternate on the team and Bison men's coach Kirby Schepp worked with the team during its training camp last month.  Jon Giesbrecht of the 15U Manitoba Provincial Team was in Toronto with the squad prior to them leaving for Egypt with video support.

QUOTES
“I don’t think anything was going to stop us tonight in the championship game. Incredible tournament, like most world championships. Lots of ups and downs, twists and turns, but our guys stayed in it. They were mentally tough, they believed in themselves, and we found a way. Incredible moment for our country, for these kids…it’s unbelievable to be able to say that we’re the best team on the planet at the U19 age level. It’s hard to express what we’re feeling right now as a group.” – Roy Rana, Head Coach

UP NEXT
The U19 Women’s National team travels to France for three exhibition games July 15-17. These games will be used to prepare for the FIBA U19 Women’s Basketball World Cup in Udine and Cividale del Friuli, Italy from July 22-30. Stay tuned to Canada Basketball on Twitter for more information.