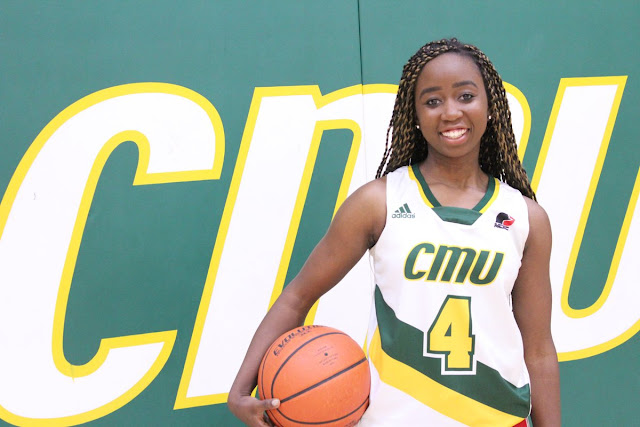 Fort Richmond Collegiate's Shirliz Apiyo is the latest recruit to sign on to play Women's Basketball at CMU in 2017-18. The 5'5 point guard averaged 10-plus points a game in her senior year of high school, earning a selection to the 2017 MHSAA Graduating All-Star Game that took place last month at Basketball Manitoba's Awards Weekend hosted by St. Paul's High School.

Apiyo helped the Centurions to a fourth-place finish in their difficult South Winnipeg zone in 2017 and will be leaving a legacy on the FRC Girls Basketball program, as the recipient of her team's Most Valuable Player Award in each of her first three years wearing black and gold, leading up to her Grade 12 season. The five-tool guard celebrated tournament all-star recognition at the 2016 St. Mary's Tournament, the 2017 Pembina Trails Tournament and the 2017 Sturgeon Heights Tournament during her final high school campaign.

"We are really excited to be adding Shirliz to our program," said CMU Head Coach Joe Di Curzio, "she is a tremendous athlete with a high compete-level. She has been a leader on her high school team every season and we anticipate her to make a smooth transition to the next level of play."

CMU Women's Basketball will open their preseason in Saskatchewan in 2017, travelling to Caronport for a weekend series against the ACAC's Briercrest Clippers, September 22nd and 23rd. The Blazers topped the Clippers for the first time in 2016, winning both home and away, and hope to keep the upper hand on their cross-conference rivals when they meet this season for a back to back series in Saskatchewan.