SALT LAKE CITY — You can tell a lot about a person by what they eat.  Maybe not in the case of Wasatch Academy standout Emmanuel Akot, though.  The 6-foot-7-inch, 190-pound junior has a unique obsession — gummy bears.

“He loves gummy bears,” teammate Damion Squire said. “You could feed him gummy bears for the whole week, and he’d be fine.”

Apparently, it works. The junior, who hails from Winnipeg, Manitoba, averaged 16.5 points, 1.01 rebounds and 1.0 assists per game while leading the Tigers to a 23-5 record with back-to-back trips to the prestigious Dick’s Sporting Goods High School Nationals tournament this spring.

With one more season left to play, the Arizona commit has been named KSL’s Game Night Live boys basketball player of the year.

But about those gummy bears. 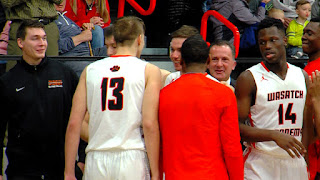 “That’s his favorite breakfast. That’s the breakfast of champions,” Wasatch Academy coach Curtis Condie said. “I’m sure future Pac-12 opponents’ student sections will have something to say about that.”

If it works, it works. And for Akot, his game does more talking than his interesting eating habits. A five-star recruit by Scout.com, Akot was the No. 1-rated prospect in Utah, the No. 1 wing in the West and 15th-best recruit overall by the recruiting service.

Emmanuel Akot of Wasatch Academy (14) celebrates with his teammates during a game against Jordan in Mt. Pleasant, Utah. (Photo: Matt Glade, KSL TV)
He also does things that few 17-year-olds can do. Averaging 16.5 points per game, Akot prides himself as much as a passer — setting up his teammates while also averaging a team-high 1.62 3-pointers per game.

“There’s no one person I try to model my game after; I try to just take little pieces from everybody,” Akot said. “I really like to score, but also rebound the ball, pass the ball and do everything. I play 1-3, and 1-4 if I need to.”

In addition to Arizona, Akot was recruited by North Carolina State, Oregon, Utah, Utah State and Virginia Tech, among others, primarily as a small forward. While he played mostly on the wing, he also spent time backing up Squire at point guard.

Akot believes he can play any position from point guard to power forward. And his coach believes it, primarily because of his defense.

“When he wants to, he is really good at defense; just like any other teenager,” Condie said. “He’s long, he’s athletic, he’s smart, and he plays hard.”

Off the court, Akot is just as impressive. The Canadian international played in the FIBA U-17 World Championships, but still takes time to smile at every other student at the Mt. Pleasant-based boarding school and takes on all challengers in chess (he’s undefeated against all but one Wasatch Academy student, by the way).

“He’s just a good guy. There are no problems with him, and we get along,” said Squire, Akot’s roommate for the past two years. “He doesn’t have any problems with anyone. Everyone likes him, and everyone gets along with him.”

The Tigers don’t play for region or state titles; as an independent affiliate of the Utah High School Activities Association, Wasatch Academy plays a national schedule. The Tigers’ other sports compete in Class 2A, and they beat 2A state champion Layton Christian 65-52 in February. They also own wins over top-rated teams like Lone Peak (71-58), Jordan (101-44) and Timpview (97-76).

The No. 16 team in the nation in the USA Today Super 25 only lost to Winward (California), Findlay Prep (Nevada), IMG Academy (Florida) and Chino (California) before a first-round loss to second-ranked La Lumiere (Indiana) at Dick’s Nationals.

But Akot wants to be even better. After all, he’s headed to a top-class Pac-12 school and has designs on the NBA.

“I just want to come back a better player next year,” Akot said.