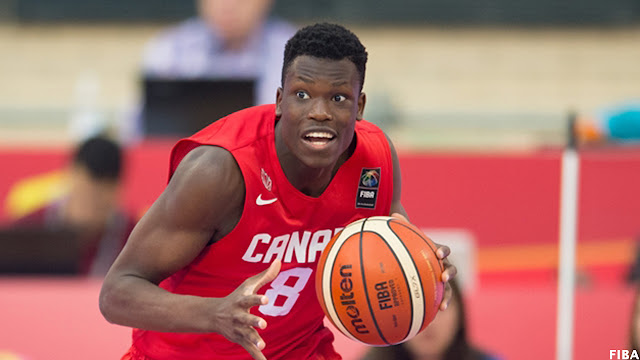 Manitoba basketball stand out Emmanuel Akot has been nominated as the Manitoba Male Junior Athlete of the Year.  The winners will be announced on Saturday April 22, 2017 at Club Regent Casino.

Emmanuel is currently attending Wasatch Academy in Utah after coming off his final year with Team Manitoba over the past summer.  He has suited up for Team Canada over the past two summers and is expected to this coming summer as well.

Last month, Emmanuel announced that he will be attending the University of Arizona for the 2018-19 season.  He will also be returning to the Bio-Steel All-Canadian Game on April 10 which will be shown live on TSN.  Back in February, he was one of a select few to be invited to the NBA All-Star Game's Basketball Without Borders Camp that led the campers through a variety of activities on and off the court, including movement efficiency, positional skill development, shooting and skills competitions, 5-on-5 games, and daily life skills seminars focusing on health, leadership and communication.

Manitoba is rich with countless remarkable sport people of all ages with amazing stories of success, service and dedication. We have young individual athletes and teams garnering national and international attention for their athletic abilities, volunteers of all ages dedicating their time to ensure a brighter, stronger sport system in Manitoba, officials who guarantee decorum and fair play, and coaches who lead, develop, and mentor Manitobans who participate in sport.

For the past 30 years, Sport Manitoba has been selecting the top youth athletes in the province. For the past 60 years, the MSSA has selected the top athletes (all ages) in Manitoba. These awards have been presented at separate events. This year, for the first time, Sport Manitoba and the Manitoba Sportswriters and Sportscasters will partner to celebrate the best in sport in Manitoba at one event.

The Manitoba Chicken Male Junior Athlete of the Year Nominees