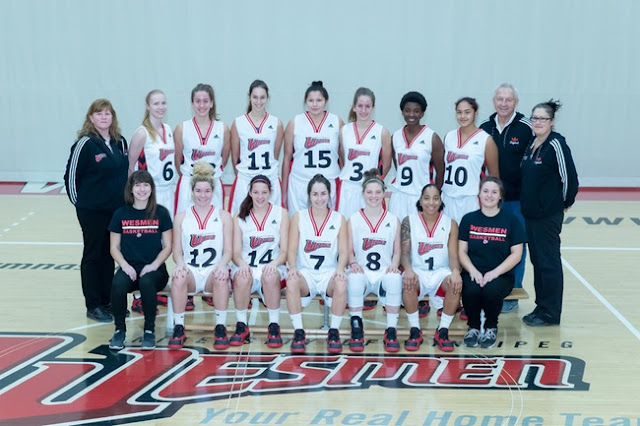 SASKATOON, Sask. – The Winnipeg Wesmen trailed by as many as 18 points in the second half, but came storming back to register an 89-78 victory over the Alberta Pandas on Saturday night to clinch a third-place finish in the Canada West Final Four at the Physical Activity Centre on the University of Saskatchewan campus.

Alberta led 54-38 well into the third quarter, but Winnipeg changed the complexion of the game with a massive 20-3 run that was sparked by the play of Megan Noonan and Taylor Thorkelsson. And the Wesmen put it away in the fourth, scoring 10 consecutive points to go up 87-76 with just over a minute to go.

Megan Noonan piled up a game-high 25 points for Winnipeg, going 4-for-6 from three-point range and a perfect 9-for-9 from the free throw line in the win. Antoinette Miller added 22 points and 10 rebounds for a double-double, while Faith Hezekiah scored 19 points and Lena Wenke finished with 10.

Both teams had the offence clicking in the first quarter, combining for a total of 49 points scored in the opening 10 minutes. Winnipeg shot 53% from the field in the first, while Alberta did much of its damage from the free throw line where the Pandas were 12-for-15. Rogers had eight points for Alberta, while Hezekiah had eight points and Miller scored seven to help Winnipeg take a 25-24 lead into the second.

Alberta went on a run to start the second, scoring the first eight points of the quarter with a run that included a triple by Sydney Kumar. Winnipeg got back to within four points after a three-pointer by Noonan with just over three minutes to go until halftime, but Alberta closed out the quarter with back-to-back threes by Emma Kary on its final two possessions to take a 45-36 lead into the break.

It looked the momentum from those two Kary triples carried over into the third after a Megan Tywoniuk three capped a 9-2 run for Alberta that put the Pandas up 54-38, but Winnipeg responded in a big way. The Wesmen then went on their big 20-3 run to take their first lead since early in the second quarter, and the score stayed tight into the fourth until Winnipeg's 10-0 run over three minutes late in the ball game.

Besides the 16-point performance from Rogers, Alberta also had nine points from both Elle Hendershot and Kary. Briana Carlyon added seven points and tied Miller for the game high with 10 rebounds.