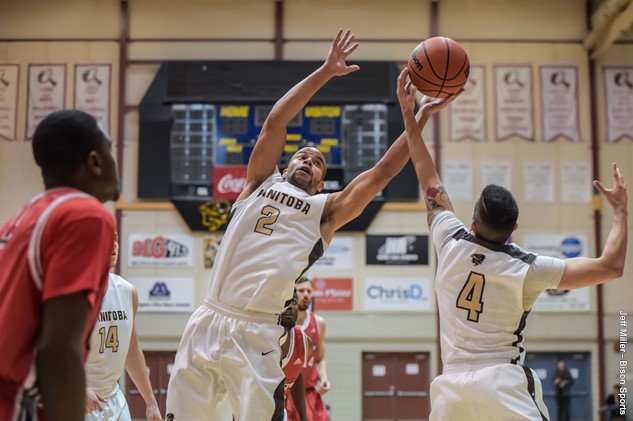 It's Alberta's 12th title in men's basketball and third of the decade after winning in 2012 and 2014. The Bisons were seeking their first-ever conference title.

First-team all-star Brody Clarke was unstoppable, finishing with a 29-12 double-double, while co-captain Mamadou Gueye finished with 20 and eight, following his monster 30-point game in the semi-final.

Like what happened against Saskatchewan the day before, Alberta's opponent simply couldn't make threes, finishing 4-22 from downtown.

At the other end, Canada West's best three-point shooting team finished 10-21 from beyond the arc and shot 54 per cent for the game.

It's the second title for Gueye, who was part of the 2014 team as a rookie.

After sweeping UBC on the road and then an incredible 74-72 victory over the host Dinos the night before, Manitoba fought all night and stayed within striking distance up until the fourth quarter when Alberta pulled away.

Up by six at halftime, the two teams traded baskets in the third with Alberta leading by seven going into the fourth. The Golden Bears scored the first four points of the quarter, pushing the lead to 10 with five and a half minutes remaining at 72-62.

Manitoba would cut it to eight, but then recruit Geoff Pippus got hot, hitting three threes in just over a minute to make it 84-66, as Alberta cruised to victory.

The former UBC Thunderbird had seven points going into the fourth, but ended up scoring 11 in the final frame, while second-team all-star Austin Waddoups, another addition this year, had a solid game with 17 points.

Manitoba and Alberta now move onto the U SPORTS Final 8 Tournament next weekend (March 9-12) in Halifax.