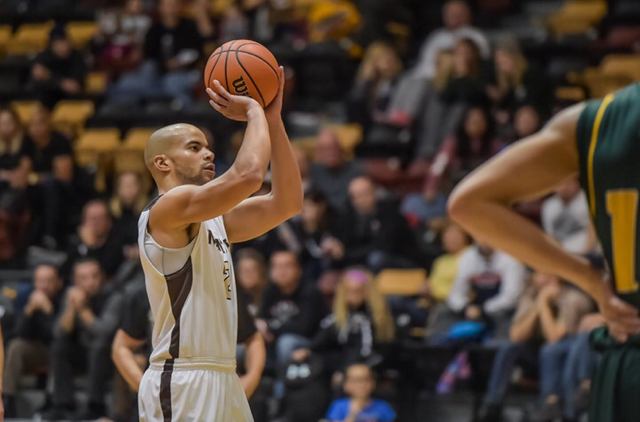 CALGARY  – The #5 University of Calgary Dinos' two chances to tie their Canada West semifinal men's basketball game were defeated on Friday, March 3 night, as the Manitoba Bisons (regular season: 12-8; playoffs: 5-0) continued their incredible snd perfect postseason run with a 74-72 victory on the road. Manitoba will now play for a Canada West championship final for the first time in program's history.

The Bisons will now play the #8 Alberta Golden Bears on Saturday, March 4 night at 9 p.m. CT (can be seen live on: canadawest.tv) for the championship, while also clinching a spot in the U SPORTS Final 8 tournament in Halifax next week (March 9-12). Manitoba advance to play in a national championship for the first time since 1985.

Down two with 13 seconds left, Calgary's Thomas Cooper drove the baseline but missed inside and although Mambi Diawara got an offensive rebound, his floater missed as the ball was batted by Bisons' Keith Omoerah into the backcourt as the clock ran out.

"Being up two there, the coach just said not to foul, just run them off the line," said Bisons guard and co-captain AJ Basi. "We just tried not to foul them and our guys dug deep."

Basi was outstanding in the victory, as the fifth-year guard and co-captain scored 19 points on 4-5 from three-point territory.

The Bisons' incredible playoff run continues, after sweeping UBC last weekend conference Quarter-final series in Vancouver after the Thunderbirds went 19-1 in the regular season. Manitoba also got revenge on Calgary, as the Dinos knocked out the Bisons in both the 2015 and 2016 postseasons.

"I kept that fresh in my mind, it stung and it gave a veteran group who has a lot of pride and confidence just that extra motivation," Basi said. "We couldn't come in here three straight years and have our seasons end here."

As they did in their regular season victory over Calgary, the Bisons kept it close from the beginning, taking a 16-12 lead after the first quarter.

Calgary was just 1-13 from downtown in the first half, but tied it at 30 going into halftime.

In the third, the Dinos made their push, as Dallas Karch threw down an incredible dunk and Thomas Cooper made a bucket shortly after to make it 50-46, sending the crowd into frenzy.

The Bisons took a timeout and responded. Basi came back with a layup, followed by a Omoerah score and it was tied at 53 going into the fourth.

In the fourth, Calgary started well, but their shooting struggles continued and Manitoba never lost its composure. However, Cooper made a layup to make it 73-71 and after another stop, Max Eisele went to the line for Calgary with 36 seconds left. He hit the first, but missed the second and Basi would split two free throws a short time later to make it the eventual final score of 74-72.

Calgary shot just 39 per cent from the floor, including a disastrous 3-23 from three-point territory, while Manitoba went 47 per cent overall and 57 per cent from downtown. Cooper led Calgary in shooting with 17 points, but on 6-24 shooting.

Along with Basi, three other Bisons scored in double-figures including Omoerah (17), Ilarion Bonhomme (13) and Justus Alleyn (10).

Bison head coach Kirby Schepp said after the historic victory, "It has been our goal all year to get to Halifax. This is a special moment for our guys and our program. I could not be more proud them and everyone who has worked hard for this for so long. But now we refocus and we will put everything we have into trying to win tomorrow vs a very tough Alberta squad."

Basi said they'll prepare for Alberta the way they have all year.


Calgary, the defending conference champions, will play #9 Saskatchewan at 3 p.m. MT for the Canada West bronze medal. The Bisons look to capture the first-ever conference title in the team's history in the gold medal contest.