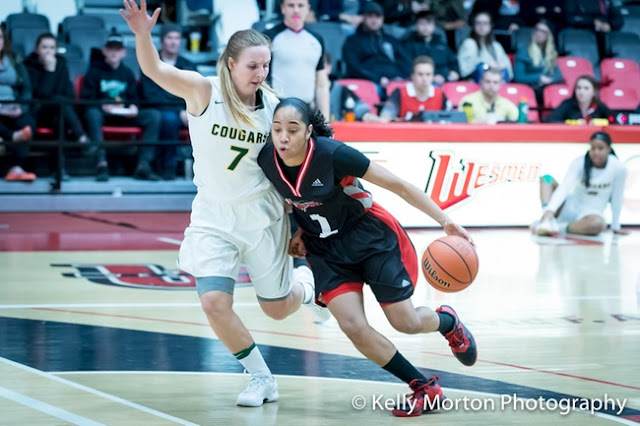 SASKATOON, SK - The University of Regina's women's basketball team earned an automatic berth to next weekend's U SPORTS Championship and will play for a Canada West title after an 81-70 win over Winnipeg on Friday night in a Canada West semifinal game at the Physical Activity Centre on the University of Saskatchewan campus.

Christina McCusker had a huge game for the Cougars, scoring a career-high 22 points to lead the U of R while Avery Pearce added 13 points and Kyanna Giles scored 11.

The Cougars will square off with Canada West Final Four host Saskatchewan on Saturday night (7:00) as the two provincial rivals meet in the conference championship game for the second time.
The loss overshadowed a fine performance by Winnipeg's Antoinette Miller, named the Canada West Player of the Year earlier this week. Miller led all players with 28 points and added eight rebounds for the Wesmen.

Besides Miller's 28-point performance, Winnipeg also got 16 points and eight rebounds from Faith Hezekiah and 12 points from Lena Wenke. The Wesmen will play Alberta tomorrow night (5:00) to decide a third-place finish at the Canada West Final Four.

Winnipeg jumped out the gate quickly, forcing an early Cougar timeout after a Wenke three-pointer put the Wesmen up 7-0 two and a half minutes into the game. But Regina got right back into it, scoring on three consecutive possessions soon after the timeout and taking their first lead at 19-17 off a McCusker bucket following a turnover forced by Kyia Giles. Miller hit a mid-range jumper at the buzzer to send the two teams into the second quarter knotted at 19-19.

But the second quarter was all Cougars. They scored the first nine points of the period and 16 of the first 20, and ended up taking a 51-36 lead into halftime after outscoring Winnipeg by a 32-17 margin during the second. Regina caught fire in that quarter, shooting over 63% from the field and getting a pair of three-pointers from Pearce – her second and third of the game – and one triple apiece from Katie Polischuk, Sara Hubenig, and Michaela Kleisinger.

The Cougars took their largest lead of the game at 58-39 four minutes into the third, but Winnipeg – which was an impressive 18-2 in Canada West play this season – had a response. The Wesmen ended the third on a 14-4 run to get within six points after three quarters, but that was as close as they'd get. Regina opened the fourth quarter with six straight points, including a huge transition three by Polischuk to put the Cougars up 73-61 two minutes in. Regina held Winnipeg to just nine points in the final period to seal the win.