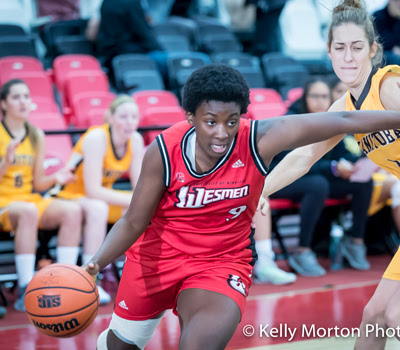 For the second consecutive week, a member of the University of Winnipeg Wesmen Women's Basketball team has been recognized for her outstanding play.


The University of Winnipeg Wesmen in conjunction with the Canada West Universities Athletics Association announced today that second year forward Faith Hezekiah has been named the Canada West Female 2nd Star of the Week, for the week ending February 12, 2017.

Hezekiah had her best weekend of the season in helping the Women’s Basketball team pick up a weekend sweep on the road against the University of  Victoria Vikes this past weekend.

In Friday’s 88-76 win she scored 20 points and was beyond consistent connecting on 10-of-15 shots from the field.

Hezekiah was unstoppable on Saturday scoring a game high 29 points on 13-of-17 shooting while hauling down 10 rebounds in an 80-69 victory in the final regular season game of the season.

"Faith has embraced her training through the season and has elevated her performance as a result. This past weekend showed the impact Faith can make with her very strong numbers", said Wesmen head coach Tanya McKay.

Winnipeg finished regular season play on top of the Canada West standings with a record of 18-2.

The team will have the first round bye in the playoffs and will host the best of three quarter finals starting on Thursday February 23rd against the winner of the MacEwan/Victoria Play In Series taking place this weekend.