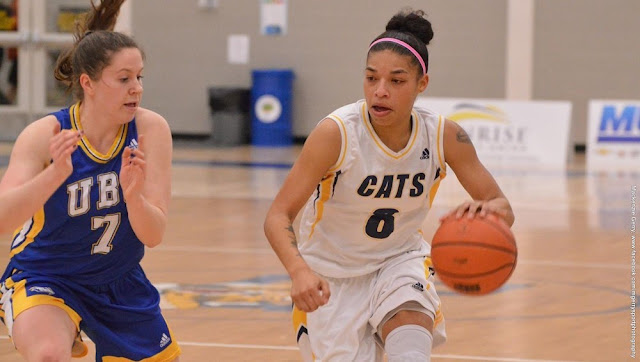 BRANDON - For the second straight year Bobcat guard Keisha Cox  is being recognized for her outstanding play this season being named a Canada West second-team all-star.

Cox improved both the Bobcats performance this season and improved on her third-team all-star nod last season.  Cox led the Bobcats in nearly every individual statistical category, and was among conference leaders in scoring, rebounding, steals, assists and minutes played.

"Keisha was phenomenal for us this season," says coach Novell Thomas . "Keisha was a major focus for the opposition and would often draw two, three, four, defenders. To still be able to average nearly eighteen points per game is incredible. We relied heavily on Keisha to produce for us offensively and defensively, and I'm pleased that she has received this honour."

Cox helped the Bobcats to the team's best conference record (8-12) and the team's first playoff appearance since joining Canada West in 1999.

The Oceanside, Calif. product proved to be one of the conference's best on both ends of the court, finishing third in conference scoring with 17.9 points per game and second in steals with 3.7 steals per game.