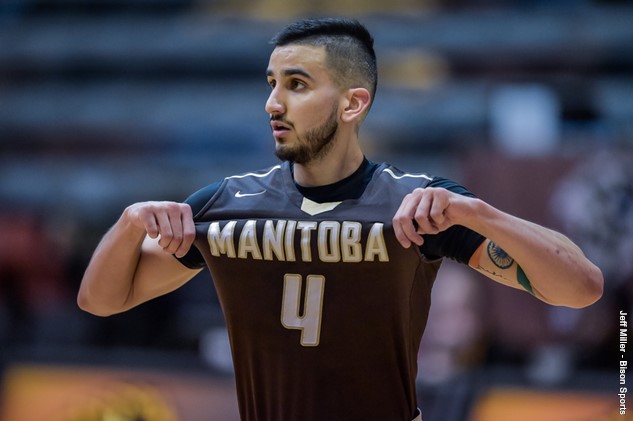 Playing his final game in a UBC Thunderbirds jersey, Jordan Jensen-Whyte was an absolute force. The senior guard had a game-high 33 points, 10 assists, and five rebounds in his swan song, and was the reason the 'Birds got to the extra frame, tying the game at 87-87 with two clutch free throws in the game's dying moments.

Ilarion Bonhomme had 26 points, as well as 10 rebounds, for the visiting Bisons, while Justus Alleyn knocked down 4-of-6 three balls en route to 18 points, and Basi picked up 12. For UBC, Patrick Simon also finished with a strong 21 points on 7-of-13 shooting, while Conor Morgan notched six of his 14 points in the overtime period to give UBC a fighting chance.

The physicality and stout defending from yesterday's opening contest bled into Friday's first half, as the Bisons and 'Birds went back-and-forth for the majority of the opening 20 minutes. Struggling from the free throw line and beyond the arc early, Simon and Taylor Browne knocked down some deep balls late in the second quarter as UBC started to gain some momentum.

Jensen-Whyte drilled a clutch mid-range jumper on one end before sprinting back on defence to hold the Bisons at bay on the other end. Once trailing by as many as eight points, the Thunderbirds cut the Manitoba lead down to just 37-35 by the break.

Jensen-Whyte and Simon led the 'Birds with 10 points at halftime. For Manitoba, Bonhomme had 10 points, while Alleyn chipped in with eight, including a pair of triples.

With Morgan in foul trouble, Jensen-Whyte took over in the third frame. The captain's physical nature was on full display, as the guard got to the line on four separate occasions, pulling UBC ahead by as many as six points, up 59-53 with about four minutes to play in the quarter.

A late 16-2 Manitoba run saw the Bisons flip the script late in the stanza, eventually retaking taking a 69-64 advantage into the fourth

Down 75-66, Simon kicked off a UBC comeback with a deep corner three, continuing his electric night from the outside. Jensen-Whyte pulled the 'Birds within two with a strong drive to the hoop and a layup.

The two teams continued to trade shots in final stages of regulation, as a layup from Will Ondrik put UBC down 87-85 with 37 seconds to play, setting up Jensen-Whyte's heroics in regulation with 5.5 seconds to go before the overtime session.

The game will be broadcast live at http://www.canadawest.tv.