Tania Wallack Commits to University of Winnipeg for 2017-18 Season 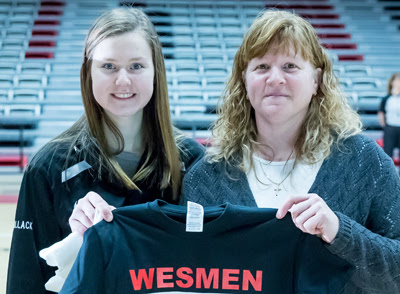 The University of Winnipeg Wesmen and Women’s Basketball head coach Tanya McKay has announced that Tania Wallack (Glenlea, Manitoba) - pictured left - has committed to joining the Wesmen Women’s Basketball program for the start of the 2017-18 Canada West season next September.

Wallack a 5’10” guard is currently completing her final year at Vincent Massey Collegiate (Winnipeg). She is also a member of the Basketball Canada Centre of Performance Program thru Basketball Manitoba and a member of the Provincial Juvenile NAIG (North American Indigenous Games) team that will compete in the NAIG games in Toronto, Ontario next July.


She played at the Manitoba Summer Games held in Steinbach this past summer and averaged 16 points, eight rebounds, eight assists and six steals per game. Wallack was a member of the U15 Manitoba Provincial Team for two years (2013, 2014).  She has also be invited to attend National Identification camps with Canada Basketball.

Aside from basketball, Wallack is also a member of the Trojans Varsity Girl’s Volleyball team.

“We are very pleased and excited that Tania has selected the University of Winnipeg and the Women’s basketball Program to continue as a student athlete for 2017-18. She is a hard worker and is driven to be the best she can. Her strengths are tough defense and crashing the boards. Tania will be a great addition to our program”, said Tanya McKay, University of Winnipeg Wesmen Women’s Basketball head coach.