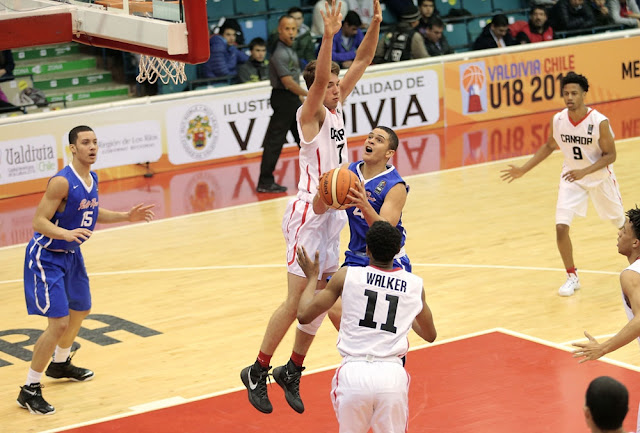 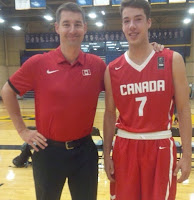 Basketball Manitoba is currently in the bidding process to be considered as a host of two high profile international basketball events to potentially come to Winnipeg in the summers of 2018 and / or 2019.  Canada Basketball has an open bid call to Canadian communities to potentially host the FIBA Americas 2018 U18 Men’s Championship and / or the FIBA 2019 U19 Men's World Championship.  This past summer, Manitobans James Wagner and Kirby Schepp (pictured above in action and to the right) represented Canada at the U18 event in Chile.

Basketball Manitoba has worked very closely with Tourism Winnipeg to complete the bid process over the last 5 months and have recently submitted the competitive bid packages to Canada Basketball for their consideration.  From there, Canada Basketball will determine who they see as the best option to host these events in Canada with the successful Canadian bid taken to FIBA for a final determination.  This should be set sometimes in 2017.

Basketball Manitoba President Ross Wedlake commented, "The City of Winnipeg and Basketball Manitoba have successfully hosted many national and international sporting and cultural events such as the 1999 Pan American Games, the upcoming Canada Summer Games of 2017 and the 17U and 15U National Basketball Championships in 2010, 2011 and 2016. We have a traditionally strong volunteer base along with very capable and dedicated sport administrators. In addition, our facilities in Winnipeg would be more than adequate to host such an event."

“Winnipeg is proving itself as a world-class sport tourism destination. Recent successful events hosted include the Grey Cup, the Heritage Classic and the FIFA Women’s World Cup. New investment in sport facilities in Winnipeg have helped us bid on and host an increasing number of prestigious sporting events,” said Karen Goossen, executive director of Tourism Winnipeg. “Hosting these two basketball championships would result in a welcome boost in visitation at a traditionally slower period for local hotels. There is no better time for them to visit with our stellar new attractions and lively festivals. Collectively, these championships are expected to draw approximately 750 participants to Winnipeg and generate a direct spend upwards of $700,000 on hotel rooms, dining, shopping, recreation and more.”

In the summer of 2015, Canada hosted the FIBA Americas Women’s Championship in Edmonton. It was the first FIBA tournament hosted by Canada Basketball in over a decade. The wildly successful event saw record crowds and television audiences cheer on Team Canada to a gold-medal finish and an Olympic berth. Building off the growing momentum of the sport, CB has developed a multi-year hosting plan that targets major FIBA events. Canada Basketball is seeking to engage stakeholders and partners to help win the rights to bring these major international competitions, such as these events to Canadian soil.

The objectives of Canada Basketball’s hosting plan are to:

The FIBA Americas U18 Men’s Championship is the first step in the coming of age of global superstars such as Andrew Wiggins, Cory Joseph (both pictured), Kyrie Irving, Kemba Walker, Tyler Ennis and others. Stars of tomorrow, born January 1, 2000 or later will be eligible to play in the 2018 edition. The best (8) teams from across the Americas will take to the court. The United States has been a dominant force at the tournament since its inception winning 7 of the 9 editions. However, Canada is becoming a threat to the US dominance having won bronze medals in 2008, 2010 and 2012 and a silver medal at the last competition in 2014.


The FIBA 2019 U19 World Championship is a 9-day period of intense competition, taking place in a fun and friendly atmosphere open to the entire community and enjoying a high level of visibility thanks to live broadcasting/webcasting and FIBA’s digital platforms.

The event recognizes the power of team spirit, the incredible feeling of participating in a global competition at the youth level and the challenge of facing the very best teams from around the world in the age category. Aside from the results and memories of what takes place on the court, this event represents a chance to make a very fruitful investment in getting sports fans and the general public excited about basketball and physical activity while offering an immense opportunity to achieve a lasting legacy for the host community and the country. By bringing together top talent and national heroes, this event has helped make the sport of basketball one of the most popular in the world. Over time, the reputation and power of this youth event has solidified it as one of the marquee youth sporting events in the world.

The FIBA U19 World Championship has seen the coming of age of global superstars such as Cory Joseph (pictured), Kelly Olynyk, Stephen Curry, Jonas Valanciunas, Matthew Dellavedova, Andrew Bogut, Klay Thompson and Dario Saric. Stars of tomorrow, born January 1, 2000 or later will be eligible to play in the 2019 edition with the best 16 teams from across the world will take to the court. The tournament consists of teams from the 5 FIBA Zones: 4 from the Americas, 5 from Europe, 2 from Africa, 3 from Asia and 1 from Oceania. 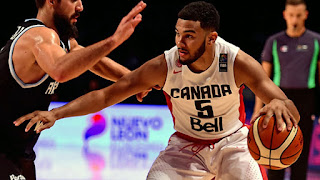 Basketball Manitoba is indebted to the support thus far from Tourism Winnipeg, the City of Winnipeg, the Province of Manitoba, Sport Manitoba along with our potential local host sites for their support through this bidding process.  ​